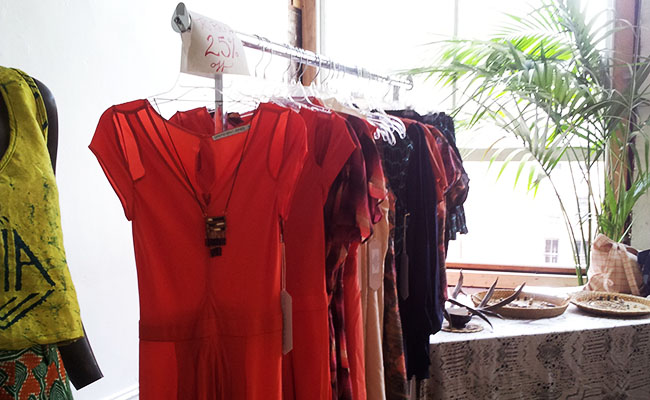 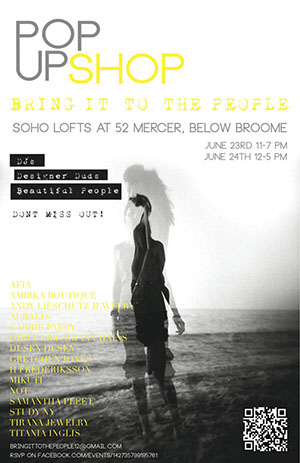 Last weekend, I attended Bring it to the People, an independent designer pop-up in Soho. It was a two day event, featuring 17 New York based designers, displaying work in apparel, accessories, and jewelry. The event, it should be noted, was conceived and executed  wholly by the designers themselves.

One jewelry designer I met, Graciela Fuentes of  Tirana Jewelry, shared with me the motivation behind the event.  Simply put, it makes more sense for the designers to join forces, share responsibility, and reap all the profits themselves, than to work with a boutique or other retail space that, while they may have a following, couldn’t possibly sell your brand as effectively as you could.

According to some of the designers involved, the event was a success with great foot traffic and a decent amount of direct-to-consumer sales; the two biggest goals, I would imagine.

In addition to attending this pop up shop, I recently received an email from the founder of a brand called Silvania, a Portland-based ethical apparel label. She, along with 4 other designers and the very well known brand Patagonia, have teamed up to produce an ethical fashion show on July 5th in Portland, Oregon called Sundown. This too was an initiative that came to fruition due to the drive and excitement of a core group of designers with a real passion for their work, their brand’s missions, and confidence in their own abilities.

I have to say, as someone who has helped produce several independent fashion shows in various areas of the country over the years,  when something like this comes together and is successfully executed, it’s way more exciting to both the designers and the consumers, than say a “been there, done that” department store pop-up.

Are you inspired yet?  Good, that’s what I was hoping for.

So here are some tips to consider early on:

These are just a few things to think about when deciding to create an event around your brand.  It may seem a bit overwhelming but remember that when it comes to your work, you have passion, exuberance, and a drive to succeed that can all be just as easily applied to putting together an initiative like this.

What are you waiting for?

Has anyone worked on creating a pop-up or fashion show sans the support of a major retail outlet?  We’d love to hear about your experiences; both the successful and the “not-so-successful”.