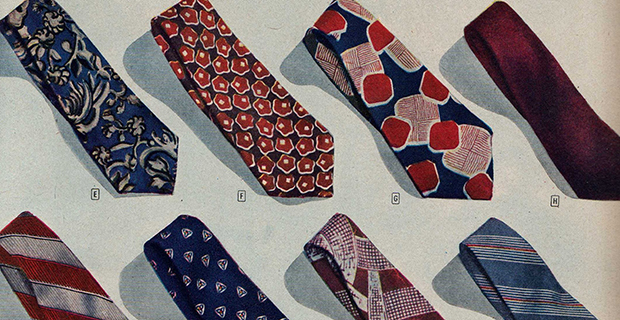 Menswear is a decidedly strange area of fashion, in that compared to women’s wear; the basic components of a man’s wardrobe haven’t changed much over the past hundred or so years. Men have a definitive “uniform” of sorts, especially when it comes to dressing up. A key component of this is the necktie, which is one of the very limited mainstream ways for a man to accessorize.

So how did the necktie come to be?

A friend recently pointed out how strange it was that the only kind of socially acceptable “male jewelry” was tying a piece of fabric tightly around one’s neck- almost like a noose! It turns out that as with many aspects of fashion, the necktie was born as a weird way to signify status; a message that has clearly stuck with this particular accessory all through its history.

Iterations of the tie stretch as far back as 221 B.C. China’s first Emperor, Shih Huan Ti, left behind a big clue that he was among the first to sport this trend: every single member of the terra cotta army he elected to be buried with was decked out in an early version of a tie. Fast forward to 113 A.D., where the accessory was hugely popular among the Romans. Orators frequently opted to wear “neckerchiefs” to keep their vocal chords warmed during their frequent speaking engagements. Soldiers also noted their status by wearing fabric around their necks.

During the 1500’s, elaborate neckwear for men became wildly popular among the upper class in the form of the “ruff”. Short for “ruffle”, the name is an apt description for the accessory: a large, heavily embellished ruffle of fabric work around the neck. Wildly flashy and impractical, this was a definitive status symbol, similar to a modern-day Rolex or sports car. In fact, some ruffs were made so large, the wearer was unable to lift a fork to his mouth, and required the aid of a servant to eat.

A more recognizable version of the tie (by modern standards) began in early 1600’s Croatia. Once again, it was worn mainly by military men. Soldiers in the Croatian Military Frontier accessorized with short, knotted neckerchiefs while fighting in service of the French. Parisian society was smitten with the bright colors and beautiful silks that characterized these accessories, and began adopting the look as a fashion trend. These neckerchiefs, known as the cravat, were inspired by the military version, but with decidedly more glamour. Throughout the years, the cravat took on a variety of styles. In fact, social class could be signified not only by the ownership of a cravat, but also in how elaborately one knew how to tie it. Fabrics such as lace and taffeta were used to convey an even more fashionable look. Even King Louis XIV sported the style.

Though glamorous, the cravat was cumbersome, and declined in popularity as the 19th century gave way to much more practical fashions. Working class men in England and the United States began wearing bandannas for function rather than aesthetics. Men favored accessories that were easy to knot, that wouldn’t easily come undone. For the upper class, a simpler version of neckwear called the “stock” offered the elegance of the cravat, but with a bit more ease of use. A strip of linen or silk was tied to conceal the entire neck.

From the stock inspired three subsequent styles of neckwear: the bowtie, the ascot, and of course, the necktie. The necktie came about during the Industrial Revolution. Thinner and less formal than an ascot, it could be tied into a variety of knots, allowing for more versatility. Initially, the knot was the only part of the tie that showed, with the rest being tucked into the waistcoat.

In 1924, Jesse Langsdorf of New York patented a method of making ties that is still used today. The design, known as the “Resilient Construction,’ includes a bias-cut stiffened wool interlining, which allows for a cleaner knot that can be tied more easily and is less likely to come undone. 1920’s France brought about the “designer tie.” These were made of expensive, fabrics and decorated with intricate patterns. This accessory spread throughout Europe, and gained favor with the Duke of Windsor. In 1936, the Duke invented the famed “Windsor Knot.”

In the 1950’s and 60’s, tie styles simplified and slimmed down. The accessory was still regarded as a status symbol, but also a signifier of the “working man” of the times. As the number of office employees grew in the 20th century, the tie became a business wear staple as it was thought that the accessory gave off a certain impression that improved morale and sales.

The 70’s and 80’s gave way to larger, wilder tie styles, becoming more of a fashion statement than for purely work wear. 90’s styles were less flamboyant, and haven’t changed much from then until now, perhaps with the exception of the occasional hip “skinny tie.”

As it stands, menswear is notorious for being slower to evolve than women’s fashion, so it might be awhile before we see any new improvements in tie styles.