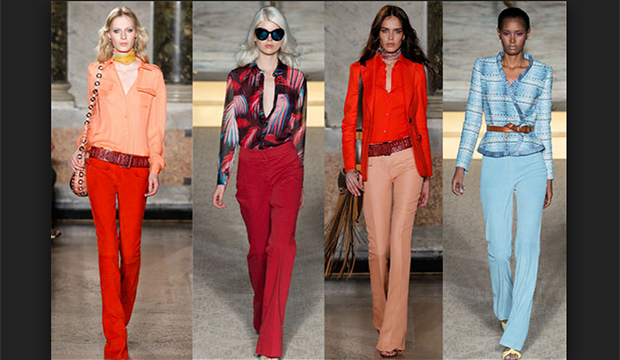 Skinny fit has been the “it” jean silhouette for quite awhile now, but in the past few seasons, the flare leg has slowly but surely been making it’s way back into the main stream. Flare jeans, or “bell bottoms” have a strong association with the 1970’s vibe of their heyday, but the history of these pants stretches back before that particular decade, originating in an unexpected place.

The first iteration of the “flare leg” came about around the 19th century. Surprisingly, this style was largely worn not by counterculture youth, but sailors in the navy. At the time, the U.S. navy lacked a standardized manner of dress, but many adopted a pant style that included a wide leg, and ended in a “bell” shaped cuff at the bottom.

The exact reason for why this style became popular is unknown, though some speculate that it might have been for functionality. The extra room at the bottom of the leg allowed the wearer to remove the pants over boots. They could also easily be rolled up to avoid getting drenched in seawater. Another unique (and slightly odd) function- the wide legs could be filled with air and used as a makeshift flotation device.

The pant style remained stuck firmly in the military until the 1960’s rolled around. Counterculture youth had begun to reject anything and everything that had to do with convention when it came to fashion. This included not only the clothing itself, but also where one shopped.

Disenchanted with the departments stores favored by their parents, young people of the 60’s began shopping at army surplus stores. This departure from the typical shopping experience was driven by several factors: prices, a desire to re-use what was already available rather than buying something brand new, and of course, style. Buying and re-styling old military clothing conveyed the strong anti-war sentiment that was prevalent at the time. Shoppers would often purchase a garment and alter it, often with embroidered flowers, peace signs, and other forms of embellishment.

A favorite item available at the army surplus was, of course, the bell-bottom pant recycled from navy uniforms. This unique style was a huge hit among both men and women, as the cut was a huge departure from the straight-leg styles that saturated runways and department stores.

Sporting bell-bottoms became a distinctive sign of the counterculture lifestyle. There were only a limited amount of the real military version however, and as the popularity of the style grew, demand began to exceed supply. Those who wanted to get the look began to get creative. Cutting open the seams and sewing extra fabric into the lower leg of straight leg pants to widen them became popular among DIYers. Many chose colorful, patterned contrasting fabrics to add an extra unique touch.

By the 1970’s the flared leg had become such a popular pant style, designers were starting to take notice. Ironically, the cut that had previously been a symbol of rebellion and “anti-fashion” became a full-blown trend that would characterize the 60’s and 70’s to future generations.

Designers, no longer put off by the stigma of bell-bottoms as clothing for “dangerous radicals”, began making the pants in a wide variety of materials, denim in particular. The cut typically followed a general formula: skintight at the waist, and flaring out from the knee to the hem. Some wore flares so wide they were referred to as “elephant bells.” When celebrities such as Sonny and Cher wore the style, it further cemented it into mainstream culture.

The 1980’s brought the return of the skinny jean, and many thought the flared style was gone for good. However, 90’s fashion included a penchant for baggier styles as well as denim, so the flare jean made a comeback. This particular cut was subtler than the “bell-bottoms” of the past, referred to as “flares” or the even slimmer “boot cut”. While the 60’s and 70’s favored a wide leg, the 90’s version was characterized by a slim hip and upper thigh, with a small flare at the bottom. Low-cut, “hip-hugger” flares were especially popular.

Today, flares are making a fresh new comeback. Wide leg and flare leg pants have become a fresh alternative to the recent over-saturation of skinny jeans in stores and on the runway. These styles are taking more inspiration from the 70’s version, utilizing a high waist to slim the hip and elongate the leg, and tending towards a wider flare cut. A slew of designers from Celine to Balmain have included flares in their 2015 collections. These chic, modern versions come in bold patterns and colors, lux fabrics and are expertly tailored.

Though the current flare trends are a far cry from the original concepts behind their predecessors, they are nonetheless an interesting take on a classic.