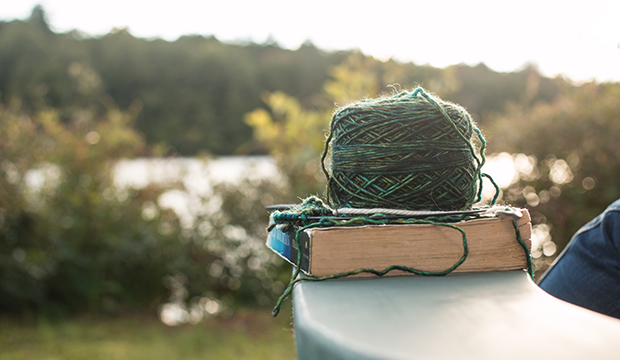 We are officially well into sweater weather- if you haven’t busted out your knits at this point in the season, you are made of stronger stuff than I. During the colder months, you can find me shrouded in two or three sweaters, hat, mittens, and scarf. If it’s knit, I am probably wearing it. Truly the greatest innovation against a winter chill, knitting is an interesting technique that has become ubiquitous in fashion. You can find it everywhere from the most elite couture houses to your grandma’s closet. So how did knitting, knits, and knitwear come to be what they are today?

Tracing knits back to their origin is tricky-. no one knows exactly when humanity picked up a pair of needles and began to knit. In fact, for years historians believed they had discovered fragments and garments that were the first instances of knitting- only to discover later that these pieces were created with a technique called nålbinding in the 2-400 AD’s. While this craft produces a fabric that looks nearly identical to knitting, the actual mechanics of it are completely different- nålbinding involves using a single needle to knot and splice yarn together. It is possible however; that the reason the two look so similar could be due to knitting potentially having grown out of nålbinding. But this is far from certain.

We can hazard another guess as to how knitting could have come to be. Or from where, in any case- the Middle East and Northern Africa. The first true knitted pieces were discovered in Egypt, dating back between 1000-1400 AD. While these fabrics are beautiful (involving indigo-dyed color work with complex patterns) their intricacy means they are likely not the first knitted garments ever created.

In Europe, the first dated knitting project was discovered in Spain. Excavated from a tomb that was sealed in 1275, we can assume the piece was created at the time when Spain was occupied by Arabic peoples. Many socks and other garments came with knitted inscriptions in decorative Arabic script, which was a unique find as Europe was still largely illiterate at the time.

Once the technique was created and perfected, artisans, crafters and designers were eager to explore it’s potential. It would spread from its Middle Eastern, Spanish, and other mysterious roots across the world. Pieces dating from the late 1200’s turned up in France and Germany. By the 1350’s, knitting had become widespread enough that it created it’s own genre of fine art- paintings of “knitting Madonnas,” (i.e. the Virgin Mary knitting) were found in Germany and Northern Italy. In the mid-1500’s, the purl stitch was introduced, the first known example showing up on a pair of stockings found in Toledo, Spain. This of course, allowed for neater finishes and more complex patterns and fabrics. Knitting had also begun to expand into more intricate garments, such as jackets patterned in gilt (metal) thread and knitted undershirts.

As the technique of knitting spread, the craft took on many regional and cultural identities, some of which you may be familiar with. For example, the British Isles are known for their heavy and textured “fisherman’s sweaters,” as well as Fair Isle colorwork. Austria and Germany’s signature knit style was once cabled and knotted textiles. South America also has distinct styles of colorwork, particularly in Peru and Bolivia.

Many crafts became mechanized during the Industrial Revolution in the 18th century, and knitting was no exception. The first knitting machine was invented a few centuries prior, in 1585 by Rev. William Lee. Its implementation was stalled due to Queen Elizabeth’s fear that it could put people out of their livelihoods (which was a correct assumption). Lee marketed the machine in France, where it would eventually lead to the industrialization of knitting. While this would become the standard for mass production, hand knitting would and does continue to have its place. During the first half of the 20th century, women knit for soldiers abroad, and it was taken up as a leisurely pastime for many people.

In the late 1920’s, knitwear took its place in the world of fashion design, thanks in large part to Elsa Schiaparelli. The designer’s famous trompleil “bow knot” sweaters and focus on knit sportswear kick started her career- as well as modern knitwear as we know it today. Coco Chanel also created dresses cut from jersey, as well as knit cardigans and sweaters. From there, many designers began incorporating jersey, as well as hand and machine knits into their collections.

In the 1940’s, figure-hugging sweaters were all the rage, and Emilio Pucci was creating popular jersey knit dresses. The 50’s featured twinsets, and the classic knitted Chanel suit. The 1960’s brought about Missoni’s signature zig-zag knit pattern, and knit mini skirts and dresses. By the 1980’s, sportswear was at it’s height of popularity, and knitwear followed suit, with brightly colored leggings and sweaters being extremely trendy.

Today, knitwear is heavily used both in high fashion, and in the DIY scene. Who are some of your favorite knitwear designers?