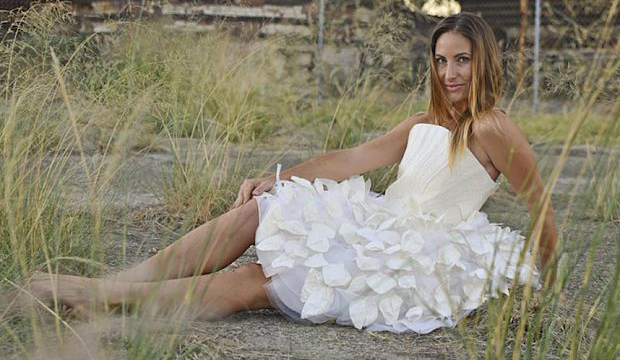 What would a party be without a great dress and great booze? In today’s world of incredibly innovative fashion, now you can have them one in the same. Vino aficionados might remember an article we ran awhile back about Nanollose’s wine dress, an eco-conscious garment made from a certain classic beverage we all know and love. This dress utilized an alternative material and production method to create a fascinating end result. For those who are fans of Nanollose’s work, rejoice- their efforts have not stopped there.

This year, Nanollose rolled out a new garment made from another drink many of us enjoy: the beer dress. Yes, you heard correctly: a dress made entirely from beer. While this may seem like a gag garment one would wear to a football game or bachelorette party, rest assured, the resulting dress is gorgeous. So much so, that in fact it would hardly look out of place on the red carpet. You would never guess the material just from looking at it.

So how is it possible to create such innovative pieces from, well, party drinks? While most fashion houses use traditional cut-and-sew methods to craft their clothes, the Australian-based firm eschews the norm. Rather than sewing with a needle and thread, Australian scientist Gary Cass and fashion designer Donna Franklin teamed up to utilize a process that is a little more off the beaten path…

Fermentation is the main in-house production method for creating this dress.

Here’s the abridged version of how it works:

The process starts with (what else?) beer, which is fermented. A bacteria named Acetobacter is then added to the beer. While beer and bacteria don’t exactly sound like a winning combination in fashion (or anything for that matter), there’s a method to the madness. Why this bacteria specifically? Unlike the bacteria we are familiar with that often cause us to get sick, Acetobacter is quite the opposite. It is a “naturally found, friendly, non-infectious, non-harmful bacteria.”

So now that we know this noxious-sounding mixture is in fact safe, let’s get the actual creation of the fabric. The reason for adding in the bacteria is that it is a “living” thing of sorts and can “drink” up all the beer, converting the liquid into a raw fiber material. Imagine that- a natural bacteria taking care of the typically complex and toxic process of creating a synthetic fiber.

This unique production process has the potential to make quite an impact on the fashion world, if not for the novelty of the material, then for how eco-friendly it is. The fermentation process has little negative impact on the environment. If it were to be scaled up, there would be few problems- unlike cotton, with which industrial level productions scales are highly problematic. Additionally, the fabric is able to be “grown” into essentially any shape imaginable. This creates potential for it to be used in seamless, one-piece garments that produce little to no waste when cut to be sewn into clothing. It can also eliminate the need for sewing thread as a raw material, as well as the entire sewing process.

The beer dress addresses a few glitches that the wine dress previously had- the technology for this textile technique has come a long way in between the two projects. For starters, the fabric quality of the beer dress is much higher. The wine dress looked (and smelled) exactly like what it was made from. If you look at the resulting fabric on the beer dress, you would never guess that it was made from beer at all. The textile is soft, white, odorless and in fact, similar to cotton both chemically and by the hand of it. The fiber’s official name is “Nanollose Microbial Cellulose.”

Additionally, the wine dress fabric had come out rather stiff, only flexible when kept somewhat wet. It also has an odd texture that made it stick to the skin. Conversely, the fabric of the beer dress bends and drapes much more easily than it’s predecessor, and is much more comfortable to wear. Wearability is key for this project- if it cannot be easily worn, it cannot be easily sold.

The dress itself also ties back into it’s origin material. While it certainly does not look as though it was made from beer, the design is, in a sense, inspired by the drink. The evening dress features a beaded bodice and embellished knee-length skirt. The beading is meant to be an allusion to “beer bubbles,” while the floral elements recall hops flower bracts.

What do you think? Would you wear the beer dress, or a garment made from this fabric? Could this catch on enough to change the fashion industry?