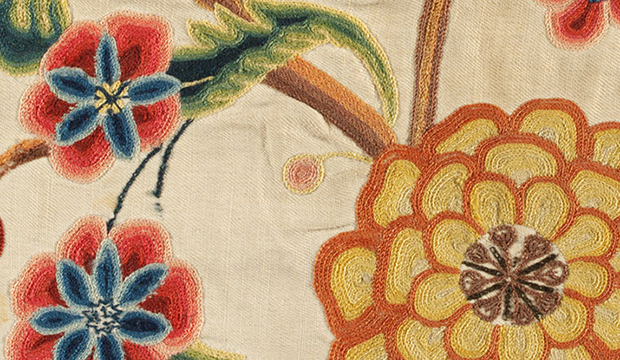 Many fashion trends these days seem to be heavily focused on the little details, specifically, embellishment. Embroidery in particular is especially alluring; there are a wide variety of techniques that are associated with this craft, and it is suited for nearly any kind of raw material, so long as it can be spun into thread.

The history of embroidery is just as diverse, spanning from the pure golden stitches gracing the gowns of queens, to motifs created in simple cotton made accessible to even the poorest stitcher.

Embroidery has been around for as long as sewing; the processes are the same basic concept, with the latter associated with creating, while the former with mending and later, embellishment.

Early embroidery samples have been unearthed from ancient cultures all over the world. The oldest example thus far was discovered in Cro-Magnon Russia, dating back to 30,000 B.C.; fur garments were found embellished with hand-stitched ivory beading.

Despite this find, embroidery, like many needle arts, are believed to have originated in Asia and the Middle East. For example, Chinese thread embroidery is such a tried-and-true process, that it spread and is still in use today- despite originating in 3,500 B.C. By 500 A.D., China has perfected their embroidery techniques, using fine materials such as silk thread, precious stones and pearls. Embroidered clothing became a symbol in both ancient China and Japan. Even important historical scenes were occasionally embroidered in fabric rather than painted.

Japan’s tradition of embroidery spans back about 1,600 years. At first, the craft (known as nihon shishu in Japanese) was reserved only for the adornment of objects and garments for religious ceremonies. However, the technique began to develop and change, taking on a more artistic rather than religious connotation. Shishu is characterized by intricate patterns made in silk and golden threads, usually on silk. Another kind of embroidery called sashiko is also prevalent technique. Originally developed as a more decorative way to repair fabric, this running stitch technique became valued purely for it’s aesthetic.

In Europe, the practice of embroidery began in the Middle Ages, and a vast array of techniques and styles would develop in the ensuing centuries. In this particular time and place, professional embroidery was often the job of nuns, especially in Italy and France. Like Japan, older European embroidery was most frequently seen on religious textiles. Everything from priest’s robes, wall hangings, and even the Bible were heavily embellished. However, the church was not alone in the market for embroidery- royalty and nobility were also loyal patrons of the craft. So much so, that an in-house embroiderer was often employed by monarchs and upper-class families to create personalized work for furnishings and garments. By the 16th and 17th century, embroidery had become a bit more accessible, and designs had branched out into more secular motiffs, particularly in England, where the Tudor style of embroidery featured florals and nature rather than religious iconography.

Latin America is also steeped in tradition when it comes to embroidery. For example, the mola garments of the Kuna people of Panama are an important part of the culture. Inspired by body painting, these colorful pieces of clothing came about in the mid-18th century. European settlers had introduced cloth, and women began to wear blouses decorated in elaborate patterns that were reminiscent of their traditional body paint. These bright, geometric patterns are created using reverse applique, and involved detailed and precise stitching. The beautiful motifs are unique to this kind of garment, and easily recognizable.

By 1848, embroidery had gone commercial. Jacob Scheiss started an embroidery manufacturing business in New York. He employed 15 women, who stitched all the gorgeous, intricate work by hand. However, technology would eventually catch up to meet demand. Recognizing that there was a market for mechanizing the craft, Joshua Heilmann began designing an embroidery machine. While sales were rather unremarkable, the invention was a turning point for the technique of embroidery. This first piece of mechanized embroidery technology would be quickly followed by the more successful “shuttle embroidery” and “chain stitch embroidery” processes.

In the 1870’s, there were fourteen companies manufacturing the handloom embroidery machine in Switzerland. These looms boasted multiple needles, and a speed that beat out hand stitching by a long shot, though they were still powered manually. Swiss native Isaak Grobeli sought to improve upon this, drawing inspiration from the sewing machine. Grobeli’s invention a continuously threaded needle combined with a shuttle that had been loaded with a bobbin of thread. This machine was named “Schiffli,” which means ‘little boat”, due to the shuttle’s resemblance to a boat. The machine would continue to be used and improved upon throughout the 1900’s.

Today, embroidery is often used to highlight the juxtaposition between such an old, traditional technique and it’s more contemporary potential. Alternative materials are a popular way to put a fresh spin on the craft, as well as utilizing modern motifs and colorways.