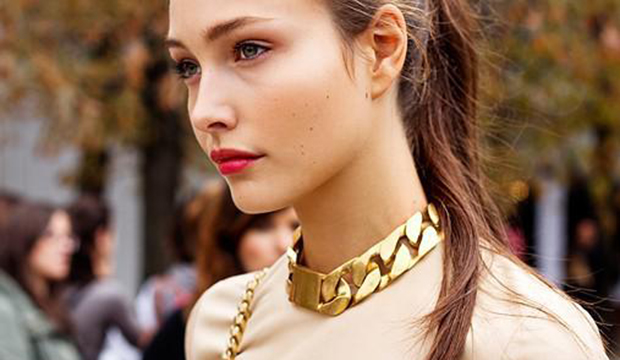 90’s fashion trends have been making a comeback as of late. Women can be seen sporting belly shirts, dark lipstick, and of course, choker necklaces.

From the layered necklace that topped off Rihanna’s incredible look at the Met Gala, to teenagers inspired by the grunge era, this particular piece of jewelry has been steadily regaining popularity. Of course, the choker has been around since long before faux-tattoo necklaces were all the rage.

The choker necklace has roots spanning all over the world; it’s history stretches back generations before the 90’s.

Native American traditions include many forms of dress and jewelry, including the choker. These pieces are typically made from bone, glass beads, or shells. They were made to be wide, covering about half the neck, and occasionally included shells or silver medallions that dangled from the center. These chokers were originally created as neck protection for warriors, as well as a form of dress for tribal ceremonies.

In East Africa, chokers play a role in many different rituals of the Maasai people. In their culture, jewelry not only serves the purpose of ornamentation, but also to denote special occasions and relationships. This was especially true for weddings. Brides would often wear beautifully crafted, brightly colored chokers for their ceremonies, with the many materials and hues taking on different meanings. Even the size of the piece was an indication of wealth. After marriage, this type of choker would be something that was worn every day.

In Europe, chokers have been ubiquitous as far back as the French Revolution. During the 1700’s, it was a style favored by royals in various countries, including Spain and England. However in France, commoners adopted the style with a much deeper purpose than to simply adorn themselves. Women of the period would wear red ribbons tied into a choker as a silent homage to those who fell victim to the guillotine. They could be worn tied at the back, or crossed into an “x” at the back for a more fashionable look. This French “trend” of the ribbon choker quickly spread to England, who copied the look of the red ribbon in a gesture of solidarity. To make the neck-wear more fashionable, women would adorn their ribbons with jeweled baubles or cameo pins.

By the 1800’s, the choker had taken on a few different connotations in Europe. A black ribbon around the neck was often used to identify prostitutes. Conversely Degas, who was creating some of his most famous works during the late 1800’s, frequently depicted his ballerina subjects wearing similarly styled ribbons. It has been argued that this sartorial choice was a purely aesthetic, to elongate the necks of his models. Others draw a parallel to the more scandalous connotation of the choker, theorizing that Degas was commenting on the ballet movement of the time. Ballerinas from working class families lead demanding lives, and were often taken advantage of financially and physically to pursue their careers.

Later in the 1800’s, back in England, the choker had begun to shed its unsavory reputation. This was accomplished almost single-handedly by Alexandra, Princess of Wales. The princess frequently traveled to India, and delighted in the way women there heavily adorned themselves with jewelry. With this inspiration in mind, and fueled by a desire to hide a scar on her neck, Alexandra began piling on ropes of pearls and velvet. These necklaces were worn tight to her throat and stacked high, creating a decadent look that the women of Bombay would soon after aspire to copy. Chokers became a massive trend in the city, with necklaces made not only from pearls, but also precious stones, lace and gold.

Fast forward to 1940’s America- the choker’s popularity was sparked yet again. The trend became a feminine symbol of power, and many American women wore chokers, sometimes multiple necklaces at once. In 1944, Life Magazine even ran a famous spread of actresses modeling the accessory, nicknaming them “colliers de chien” or “dog collars.” The revival in popularity began to spread globally, with women embellishing chokers with lace, cameos, pearls, and even diamonds.

The 90’s iteration of the choker is the one we are most familiar with. The necklace had previously been a symbol of both wealth and rebellion, and it made a definitive return to an anti-establishment statement. 90’s chokers were decidedly less glamorous than their predecessors. Diamonds and lace were replaced with hemp and puka shells, spiked dog collars, and of course, the plastic tattoo choker.

Today, chokers are once again making a comeback with the resurgence of 90s trends. While some can be seen sporting actual faux tattoo necklaces, others use the time period as a starting point for inspiration. There is a wide array of style options currently on the market, from casual costume jewelry to luxe pieces made from gemstones and other precious materials.