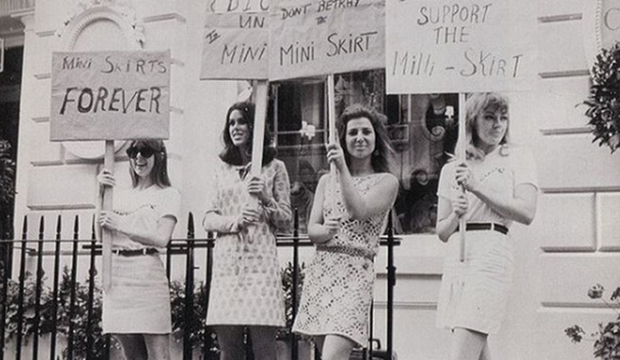 After this insanely long, dreary East Coast winter, things are finally taking a turn for the better! The temperature is rising, which means it’s time to start busting out the spring and summer wardrobe. Already the street-stylers of NYC are clad in a favorite warm-weather piece: the mini-skirt.

As some of you may know, the mini-skirt is so much more than a piece of fabric that covers part of your thighs. It is the garment that defined an entire decade of fashion and is closely linked with feminism and empowerment.

So how did this simple cut with such a complex history come to be?

While the mini-skirt is associated with the 1960’s, its story begins long before then- a few thousand years before, in fact. Archaeologists have found evidence of the existence of mini-skirts as far back as 5400-4700 BC. European figurines dating back to that time period were discovered dressed in early versions of the garment that were eerily similar to the design we know today. They even had them in ancient Egypt; fresco paintings depict female acrobats of the time wearing them.

Now let’s jump ahead a few thousand years. In order to understand the relevance of the modern mini-skirt, we need to know the circumstances that preceded it.

Europe and the U.S were rife with sexist ideologies in the 1800’s- women were thought to be weak and vulnerable, making politics, business, and physical activity out of the question. These beliefs were reflected in the fashions of the time, which included tights corsets, and long, restrictive skirts.

By the 1920’s, women’s fashions had loosened up, quite literally. Shift dresses in the “flapper” style became highly popular, and hemlines rose to just below the knee. Performer Josephine Baker caused a sensation with her costumes, which typically featured scandalously short skirts. In the 1950’s, skirts were full and had not yet risen above the knee, but shorter styles continued to feature in costumes, particularly in science fiction films of that time.

The 1960’s are when the miniskirt truly began to take off. Prior to this decade, young people were expected to dress in the same style as their parents. Sears catalogues would even feature mother and daughter models in identical dresses. However, the 60’s brought significant political and social change, and fashions changed to reflect this new era.

This younger generation was highly self-aware and rebellious. They no longer felt the need to conform to certain rules and manners, including the rules of dress. This new found attitude demanded a look to match; one that embodied a carefree, youthful spirit- and the mini skirt was the perfect candidate.

The person universally credited as the inventor of the mini-skirt we know today is British designer Mary Quant.

Quant had opened a Boutique called Bazaar, which was a popular hangout for mods and rockers. Though she lacked formal design training, she found herself with her finger on the pulse of a street style revolution, and began to make and sell clothes that reflected the attitudes and desires of her customers rather than the Parisian runways. In 1965, she hacked the hemlines of her skirts to several inches above the knee, and christened the style after her favorite car, the Mini. The aesthetic of Quant’s mini-skirt carried many of the ideas young women of the time sought to embody: youth, energy, originality, and rebelliousness.

Another designer, Andre Courreges, has also claimed credit for pioneering the mini-skirt. He began shortening his hemlines in the early 1960’s, and crafted futuristic, minimalist styles. In comparison to Quant, Courreges’ designs were imbued with a greater degree of sophistication, making them more palatable to the world of French haute couture. When asked who was the true inventor of the unique silhouette, Quant dismissively remarked, “It wasn’t me or Courreges who invented the mini-skirt anyway- it was the girls in the street who did it.”

While the mini was wildly popular with the younger generation, not everyone shared such enthusiasm. The Netherlands banned the skirt for a time, and many women had to protest in support of their beloved clothing. Designer Christian Dior, whose full-skirted “New Look,” was the exact opposite, expressed disdain for the style. Even Coco Chanel declared the garment “just awful,” even going as far to say that she had never met a man who liked women wearing them. As fashion progressed into the 1970’s, maxi styles began to come into favor, and the mini lost the momentum it once had.

The mini skirt has become a wardrobe staple in more recent times, albeit it doesn’t carry the same powerful connotations it had against the backdrop of the 60’s. It began making a comeback in the 80’s. Anna Wintour made the matching jacket and mini skirt one of her signature looks, and “rah-rah” skirts inspired by cheerleading uniforms became popular. Karl Lagerfeld, in a move that might have Coco turning in her grave, declared Chanel’s dismissal of the mini skirt the biggest mistake she ever made. He proceeded to make short skirts an integral part of the Chanel suit.

The 90’s and 2000’s saw a significant resurgence of the mini. It was incorporated everywhere from the red carpet to work wear. Today, the mini is seen no longer as the scandalous symbol of rebellion it once was. Society and social norms have evolved to catch up with the ideas the garment embodied, and it is now viewed as a basic wardrobe staple of the modern woman.