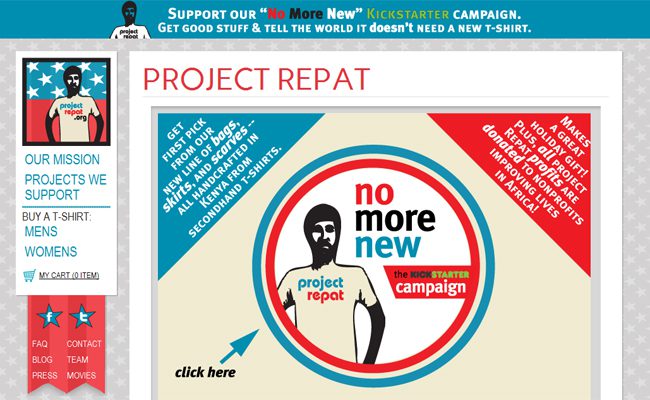 The story begins with a t-shirt: a few summers ago, Sean Hewens was on a volunteer trip in Nairobi. While traveling, his team got stuck in a huge traffic jam. After an hour or two, they discovered that the cause was an overturned rickshaw. While this alone is not all that surprising, what did cause some quizzical glances, was what the driver of the rickshaw was wearing.

It was this shirt that served as the inspiration for Project Repat,  a Boston-based clothing company co-founded by Hewens and Ross Lohr. 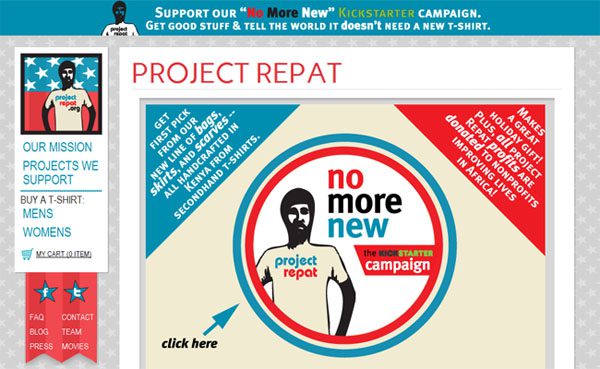 Here’s how it works:

Shirts like the one from Josh’s bar mitzvah can be seen all over Africa.  But how did they get there? It turns out, only 5% of the used t-shirts from Goodwill and Salvation Army sell in the U.S.  As for the other 95%, they are sold to middlemen, packed up into huge crates, brought to nations in the developing world, and resold to local businesses that are all part of a thriving used clothing market.

That’s where Project Repat comes in. Repat volunteers travel to these markets and purchase as many awesome t-shirts as they can to bring back to the U.S.   After being washed twice, the shirts are refashioned and re-branded into something completely new!

Project Repat has already traveled to Kenya and collected numerous t-shirts for the cause, all purchased secondhand. Jacquelyn Yau, the new in-house fashion designer for the company has recently created a line of clothing and accessories to be created from these recycled shirts.

This line of newly “repatriated” or refashioned products will be sold here in the U.S.  and 100% of Repat product sales are donated-specifically to organizations that provide aid to the disadvantaged nations from which the original shirts were purchased.

So Repat does double duty: they support the used clothing market by purchasing garments in the developing world and give back all of the profits to charitable causes!

Want to help? Project Repat recently launched a Kickstarter campaign to fund an endeavor that will help further sustain African communities. They are raising money to travel back to Kenya so that they can work with local artisans and small businesses to bring Yau’s prototype line to life.

This campaign supports independent artists just like you.  Any pledge amount is accepted, and contributors who donate upwards of twenty-five dollars get an awesome Repat product!

Check out ProjectRepat.org for info, purchasing, and videos documenting Repat’s amazing story.  To contribute to the Kickstarter campaign, go to http://www.kickstarter.com/projects/projectrepat/no-more-new-t-shirts