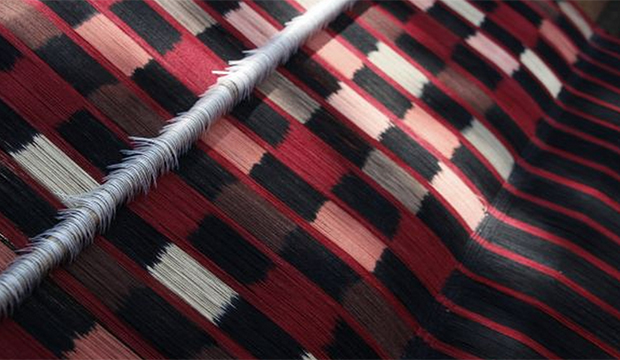 The ikat trend is still going strong, one can spot the ubiquitous pattern anywhere from bedding to runway. Although today ikat is considered a fresh, contemporary design element, it’s hardly new. In fact, it’s been around for thousands of years, imbued with a deep history and tradition.

Many fast fashion labels have jumped in on the ikat craze, with little to no regard for the process’ roots- a big mistake considering the sticky situations companies have been getting themselves into concerning cultural appropriation.

The name “ikat” is derived from the Malaysian word “mangikat,” meaning “to tie.”

A true woven ikat involves a meticulous tie and dye resist process in order to achieve the look that the pattern is known for. Prior to going on the loom, unwoven threads are dyed with tie resists strategically placed in specific areas to create an image. This can be done using the warp threads, weft threads, or both. As fabric is woven up, the threads shift slightly, giving the motif that feathered or “line-y” look that characterizes ikat fabric.

This process that yields such unique, beautiful results has been practiced for ages. In fact, ikat is one of the oldest patterned fabric techniques.

Although it is difficult to pinpoint exactly when the process was first developed (old textiles rarely survive more than a few thousand years), we are able to trace parts of its history. The earliest known existing ikat fabrics are a few pieces discovered in the Middle East, dating back to the 10th century. However, it’s possible this fabric was being created even before this; images thought to represent ikat can be seen in Indian cave paintings created in the 7th century.

The making of ikat fabric has rich, unique histories in many different cultures all over the world. It’s main roots come from Africa, Asia, South and Central America, and the process was spread across the globe via the Silk Road. Many countries developed their own distinct aesthetic styles and ways of creating the fabric.

In Africa, the ikat technique was practiced primarily by the Dioula people (who migrated from present-day Mali to northern Cote D’lvoire and southern Burkina Faso) and the Yoruba in Nigeria. The Dioula were instrumental in spreading weaving innovation throughout West Africa, and specialized in stunningly complex ikat motifs. Their fabrics are characterized by detailed weft designs, as well as a patterned warp ikat referred to as “suruku kawa” or “spotted hyena.”  The Youruba are a well-known and highly skilled group of male weavers. Their distinctive “aso oke” fabric is a striped woven fabric, often dyed with indigo, with ikat details included within the bands.

In Japan, ikat is referred to as “kasuri” and dates possibly as far back as the 7th century. In many places throughout the world ikat motifs are often geometric shapes or abstract patterns; however, Japanese weavers were highly skilled in creating complex pictures through weft and double ikat. Typically dyed in indigo, these unique textiles are known as “e-gasuri.” Used for everything from blankets to jackets, these fabrics were embellished with auspicious, meaningful symbols such as flowers and trees, animals and even gods. Today there are very few weavers still practicing these techniques, however, the craftsmen who do are widely respected.

Bali, Indonesia is home to multitude of ikat styles, characterized by a plethora of bright colors and intricate designs. The most well-known type of Indonesian ikat is  “geringsing,” a technique that originated from the village of Tenganan Pegeringsingan. The process is incredibly complex- perhaps the most complicated of any ikat. Prior to dyeing, yarn is left to soak in a bath of candle nut oil and wood ash for 42 days to ensure the red dyes will be at their brightest. The yarn is then dried and resist-tied, and sent to a nearby village to add indigo dye (indigo is forbidden in Tenganan). This is then overdyed with red, and the two hues create a deep, lovely rust color. During the weaving process, the weft must constantly be adjusted so that the pattern is woven in precisely. Additionally, women cannot weave the fabric while they are menstruating, and the work is covered by a white cloth when not being woven. Why the superstition? This textile is used on special occasions for various ceremonies, believed to have magical properties that can protect the wearer from misfortune.

Guatemala is one of the few places where ikat weaving is still practiced often. Referred to as “jaspe,” the technique was brought over from Spain, though there is evidence that the Mayan people had developed resist-dyeing techniques. Ikat has become a staple in Guatemalan weaving culture since the late 18th century, used in everything from skirts to huipils. The designs and motifs colors vary based on the area the weavers hail from, as well as what the fabric will be used for. For example, the Tzutujil people create ikats which frequently feature images of birds, and specialize in traditional men’s pants. Weaving is primarily done on backstrap looms.

While we currently see many ikat-inspired designs in the stores, many of these are prints and not true ikat. Fortunately, consumers are becoming much more aware of where and how their garments are made, and an appreciation for the handmade, real thing is helping to combat the popularity of knockoffs. For example, women’s wear label Ace & Jig frequently uses hand-woven fabrics in their collections, including ikat.