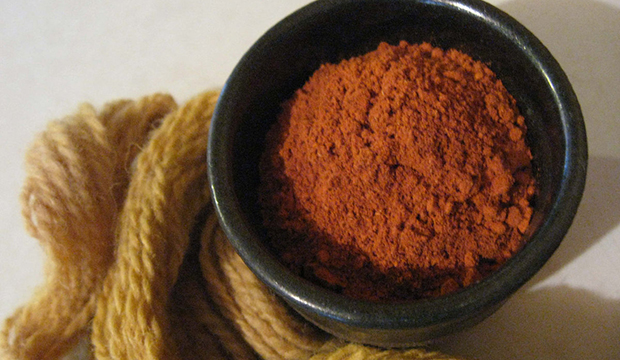 With eco-friendly design steadily gaining prominence in the fashion industry, it’s no wonder designers are going back to basics. Old techniques and “clean” or “green” materials are all the rage right now- especially when it comes to dyeing clothing. As a result, many designers are taking inspiration from the olden days of garment dyeing when natural dyes were the rule, not the exception.

One such ancient technique in particular requires that you look no further than your kitchen for the ingredients: spice dyeing.

That’s right; turmeric, cinnamon and anything else you keep on your spice rack make up a beautiful palette you can use to dye clothing.

Best of all, these dyes are so safe you could eat them- if you were so inclined.

So how did this unusual, almost magical technique come about?

The roots of spice dyeing can be traced back to ancient India, specifically during the Vedic period between 1750-500 BCE. This was a highly innovative age, especially as it is the time during which the Vedas (Hindu scriptures) were written. Veda is Sanskrit for knowledge, and considering the high importance placed on it’s pursuit, it is the perfect namesake for the era. Many advancements were made in fields such as medicine, and yes, textiles.

Ayurveda, which means “the knowledge or science of life,” is a system of healing born in the Vedic period and widely practiced in India. One of the Vedas, Atharva Veda, refers to the healing properties of herbs; it is the belief that natural elements can influence human physiology. For example, cinnamon bark is thought to awaken the system and boost energy, while chamomile is calming.

The practice of Ayurveda was and still is deeply ingrained in many aspects of Indian culture. Add in a rich textile history, and it is no surprise to learn that the two would eventually merge.

“Ayurvedic textiles” combine the use of medicinal herbs to heal with fabric-making: by using healing plants and spices as fabric dyes.

While many cultures used plants as natural dyestuff before the advent of chemical dyes, artisans in India took it a step further by considering their raw materials not just for their color, but also for healing benefits.

Ayurveda fabrics work like this: the skin is a large, and highly porous part of the body. Anything it comes into contact with for an extended period of time will be absorbed and can potentially affect one’s health. That’s why it’s not such a great idea to wear clothes that have been treated with harsh dyes or other chemicals- your skin will eat those up! However, if one wears fabric that is imbued with a healthy substance (such as that energy-boosting cinnamon) it will be absorbed and affect the body’s physiology in a positive way.

There are many herbs and spices used in Ayurveda dyeing, but perhaps the most popular by far is turmeric.

This particular spice is widely used in Indian cuisine, and can be easily recognized by its beautiful golden yellow color. This classic “turmeric” shade of yellow is unusually vibrant for a spice, so it’s no surprise that it is a widely used ingredient in dyeing. It can be difficult to dye brighter shades when sticking with natural dyestuffs, but turmeric is special in that the resulting fabric color is a strong bright hue.

Tumeric is highly valued in natural medicine as well as textiles. It’s gorgeous color and healing properties have earned it the nickname “Indian solid gold”- indeed it has quite the reputation.

In the context of Ayurveda healing, turmeric is believed to help “purify the blood” and help with a number of ailments in the skin, heart, liver and lungs. This makes it the perfect raw material for Ayurveda dyeing, combining both beauty and function.

Another spice that can be used for dyeing is a bit of a luxury- saffron.

Like turmeric, this exotic and expensive spice is also used in Indian cooking, adding not only a delicious flavor to a meal, but also a deep orangey-red color.

It has natural antibiotic properties, and is believed to help with colds, asthma, as well as ailments that come with age such as arthritis.

Harvesting saffron is an extensive process, and so it can be pricey- but there are those that feel the taste, color, and healing properties are worth the money. In India, clothing dyed with saffron signaled one was high in the caste system, and was a color of royalty in Ireland.

Today’s modern resurgence of spice dyeing may take on an updated aesthetic, but the technique is certainly no less special.

In addition to providing options for eco-friendly designers, it makes the process of dyeing easily and safely accessible to anyone who wants to try it which is great for today’s DIY culture of fashion.

For those who would rather buy fabric than make it, companies such as Ayurtex are offering beautiful spice-dyed Ayurvedic textiles for sourcing.