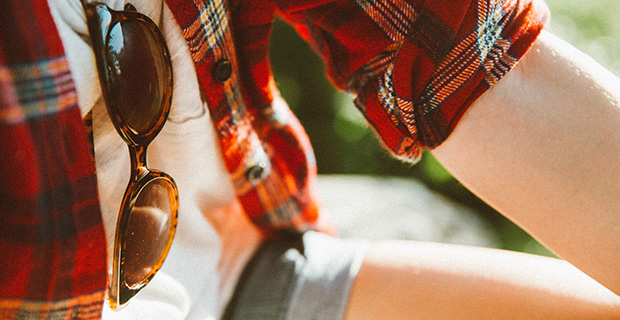 There are many prints and patterns in the world, but very few that could be considered classics. Florals for example, as well as stripes and polka dots are considered the “little black dresses” of the textile world: go-to staples that always have a place in one’s wardrobe. Another classic pattern that comes to mind is something that never goes out of style whether it be women’s, men’s, or children’s wear: plaid.

This casual classic is well-loved by hipsters, prepsters, and dads alike. You’d be hard-pressed to find someone that doesn’t own at least one plaid shirt.

So what is it about plaid that makes it so ubiquitous in fashion? How did it even come to be?

For such a simple pattern, plaid has a rather complex history and context. It may come as no surprise to you that the fabric originated in Scotland- anyone who has seen a kilt knows that tartan has distinctly Scottish roots. Speaking of tartan, let’s clarify our terminology right off the bat. There is in fact, a difference between tartan and plaid- sort of. The rule goes like this: all tartans are plaids, but not all plaids are tartans.

A plaid is a woven fabric which utilizes different colored yarns that cross over each other in order to create the blocky, linear pattern we all know. “Tartan” however, refers to very specific types of Scottish plaids (differentiated by certain colors and patterns) that are imbued with meaning and history. Many weavers had limited resources available to them: for example, color palettes were determined by which plants were available form which to make dyes. Because of this, styles varied geographically throughout Scotland, and tartans were often used in clothing as signifiers of various clans and regions.

Interestingly enough, plaid is much older than one might guess. There is evidence of Celtic tartans dating as far back as 8th century B.C., although it wasn’t until around the 1500’s that the textile started to “trend” (as much as something could trend about 500 years ago, anyway.) British and American manufacturers began appropriating Scottish tartans and creating plaid textiles for their respective markets. While these fabrics did not have the same meaning and history imbued in their designs, plaid was still considered a luxury textile. It quickly caught on with royalty and nobility- King James V even gave his wife a few bolts as a gift.

For a pattern that is so unassuming today, you might be surprised to hear that there was quite a lot of controversy surrounding the fabric in the 1700’s. Plaid was banned for almost a century in Britain during this time. So, what was so offensive about some intersecting stripes? It has less to do with the fabric itself and more to do with what it stood for. During the Scottish Rebellion of 1745, tartan was used in the uniforms of the leading Scottish military troop, The Royal Highland Regiment, or the Black Watch. The green and dark blue patterns became strongly associated with rebellion, and after the defeat of Scottish forces, plaids were banned from Britain for a considerable amount of time.

By the 19th century, plaid began to really gain traction in the United States. This was thanks in large part to the influx of Scottish immigrants who brought parts of their culture with them to their new homes in the States- including tartan fabric. The 1800’s saw the birth of plaid as we know it today. For example, you might be familiar with Buffalo plaid, the classic red and black balanced plaid popularized by lumberjacks and re-purposed by hipsters. One story goes that this particular design got it’s name during the Western expansion- it was a tartan that was from Scottish trader Jock McCluskey’s home region, and he would frequently exchange the fabric with Native Americans in return for buffalo. Conversely, Woolrich Woolen Mills claims that one of their designers created the fabric based off a tartan he had seen and named it for a herd of buffalo he owned. Either way, the mill began producing the Buffalo Check in 1850 and continues to do so today.

As time went on, plaid cemented itself as a workwear staple. In addition to the fabrics and garments created by Woolrich, Pendleton began producing men’s plaid shirts in 1924. They were a huge success and became the go-to item for work and casual wear. A few decades later in 1949, women got their own version of the plaid shirt, thanks once again to Pendleton.

Over the past several decades, trends began changing much more rapidly, and as a result, so did plaid’s connotations within the fashion world. Plaid could be seen everywhere in the 1970’s U.S., not only on shirts, but also suits, interiors, and so much more. However, plaid would soon be found in places far less unassuming. The character of Daisy Duke gave plaid a much sexier edge. Meanwhile in England, Queen Elizabeth II’s royal tartan was ironically appropriated in the form of punk style. The plaid was worn ripped up and distressed to create a look that alluded to royalty, while putting an air of rebellion front and center. Plaid continued to be the uniform of the rebel well into the 90’s, where it was a big part of “grunge” style.

Today, plaid has gone through so many iterations that it can and has been worn literally any way imaginable. The pattern can say whatever the wearer wants depending on how it is styled. Perhaps this is why plaid has stood the test of time; it’s versatility works in just about every wardrobe.