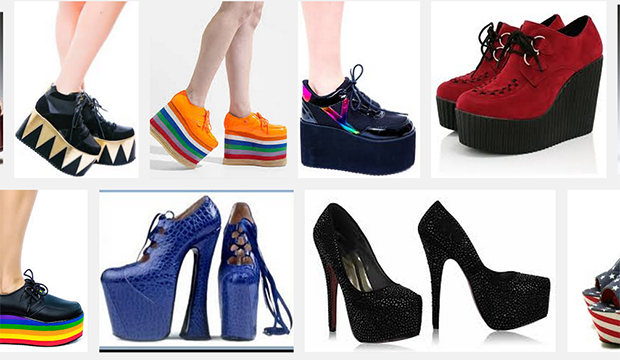 As a short lady, I love any shoe that will make me just a little bit taller. From stilettos to kitten heels, I am down to wear them all. And great news for us shorties: there is one especially gravity-defying shoe that is suddenly sartorially appropriate again. We thought they had died with the breakup of the Spice Girls, yet here they are gracing the runways and our feet once more: platform shoes.

Suddenly, everything you never knew could be supported by a platform sole has grown to new heights: loafers, ballet flats (really!), wedges, you name it. Chunky shoes, and by extension, chunky soles are in, and the vertically challenged among us are digging it.

People have been trying to make themselves taller all throughout fashion history- the 90’s are hardly the first iteration of platforms. This style of shoe dates as far back as ancient Greece. In fact, the platform shoe’s original style icon was the goddess Aphrodite, who was occasionally depicted sporting a very tall version of the footwear.

Deities aside, mortal Greeks were also known to wear platforms. Actors of the time wore sandals with leather ties and cork platforms called the Cornthus. The height of the shoe helped create an easily understood visual for the audience. Platform heights were based on the importance of each individual actor; central characters were made to be taller, and subsequently easier to see.

Platforms took on a more practical nature in 1300’s Middle East. At the time, public bathhouses were frequently used, and a fashionable yet functional shoe was required to navigate these establishments. Referred to as “kabkabs” due to the clapping sound they make while being walked in, this pair of shoes was more like a pair of small stilts. A flat sole rested atop a “bridge” of wood that was embellished with shells and pieces of ivory. These shoes elevated the wearer safely away from the wet, heated floors of the bathhouse.

The practicality of the platform continued into the Middle Ages. This was apparently a dirty time, so much so that tall shoes called “pattens” became a part of necessary outdoor attire to keep the wearer safely away from the filthy streets. Pattens were made of wood (later featuring a metal sole) and were bound onto the foot with leather or cloth ties.

Eventually, Europeans started getting into fancier versions of pattens, and the shoe evolved into one of the more recognizable early platforms: the chopine. While you might not recognize the name, if you’ve ever seen European art from the 14-1700’s, you will recall the shoe’s strange yet distinctive shape and excessive embellishments. This highly decorated version was very fashionable in Spain. Another version that was hidden under the skirt solely to give the appearance of height was wildly popular with Italian nobility. Both were the ultimate in over-the-top footwear.

Not only were these shoes overly bedazzled, the soles rose to heights that would cure even the most aggressive Napoleon complex- namely, 30+ inches. Wearers were referred to as “half woman, half wood.” These platforms were so tall, women needed walking poles and the assistance of a servant or two just to keep their balance while moving around. Despite this obvious drawback, the 4’11” Catherine de Medici loved chopines, and got them trending with French nobility as well.

Fast forward to the 1930’s, which brought about the platform shoe as we recognize it today. Salvatore Ferragamo is the father of the modern platform- despite material shortages in Italy under Musolini’s regime, the designer accepted the challenge and began exploring alternatives. Cork, he realized was readily available, durable, and lightweight. Ferragamo was able to stack layers of cork beneath a shoe’s sole to give it a significant amount of height without weighing it down. This resulted in what we now call the “wedge.” Carmen Miranda was a fan, and had a hand in popularizing the style.

By the 1970’s, platforms had become wildly popular. The shoe style paired well with bell-bottom jeans, which were a quintessential wardrobe item at the time. Platforms were so ubiquitous they were considered androgynous, worn by women and men alike. They were the “party shoe” of the era, having become synonymous with disco and the outrageous fashions that accompanied it. Seventies platforms were often adorned in outrageous ways, such as with glitter or tiny lights. One infamous version of the platform was the “aquarium,” which included live fish living inside the soles.

Platforms were a big trend in the 90’s as well. You might recall a certain Vivienne Westwood show in which supermodel Naomi Campbell tumbled to the ground due to the 9-inch platform heels she was sent down the runway in. The style was a favorite of the Spice Girls (particularly Gerri Halliwell, whose British flag platforms became iconic.) The girl band popularized the look, and by the end of the decade every style of shoe, including sneakers, had been re-designed to include a platform.

What do you think of platforms? Would you wear them today, or should this trend stay a thing of the past?