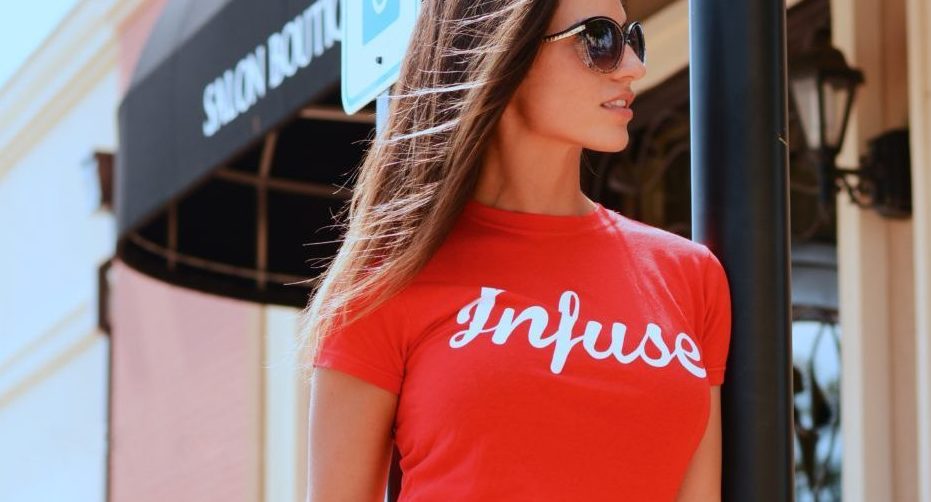 Lately, it seems that graphic tees are more popular than ever. While we still see band shirts and logos, there are so many more options. The types of t-shirt graphics we see trending on the runway are much more varied: feminist messages, silly slogans, images created by contemporary artists, etc.

While the graphic tee used to have very casual, almost childish connotations, the graphic tee of today is much more upscale- it can be worn for a night out with a skirt and heels, or to work paired with a blazer. The graphic tee is in the middle of a fashion renaissance, and there is a style for just about everyone.

The graphic t-shirt has not been around for very long, but it has made a significant and lasting impression on the fashion world. When the t-shirt first came about, it was considered to be an undergarment, and as a result, there was not much need to print any kind of interesting design onto it. (This was of course before the days of brands such as Victoria’s Secret PINK and their bold print designs for underwear.) This changed of course, once shirt manufacturers began to catch on to the power of printed graphics.

While it’s difficult to pinpoint exactly when people started to print on t-shirts, the graphic tee’s first foray into the mainstream media is easy to spot. In the famed 1939 film The Wizard of Oz, the workers who fix up the scarecrow are all sporting bright green tees with the word “OZ,” splashed across the front in bold white letters. In essence, the Emerald City was the first to catch on to the functionality and marketing potential of graphic t-shirts.

The next iteration of the graphic tee was, like many fashion trends, born from the military. During WWII, members of the military were issued t-shirts sporting the names of their branches or training programs. Veterans continued to wear their shirts even after transitioning into civilian life, and the t-shirt, graphic or otherwise, became something of a sex symbol and a fashion statement. Life magazine even published a spread and cover shot featuring a model sporting an army tee.

The Graphic T-Shirt as a Classic Trend

The popularity of the graphic tee skyrocketed at the start of the 1950’s. Marlon Brando popularized the t-shirt after wearing one in the film A Streetcar Named Desire. The ink most widely used for screen printing called Plastisol was invented giving designers more freedom in creating graphics. People began to realize the marketing potential the invention of printing on tees brought about. The company Tropix Togs acquired the rights to print Disney characters such as Mickey Mouse onto shirts- the first instance of licensing for shirts. The tees were a huge success, and this ushered in the graphic t-shirt as a classic trend.

Of course, Disney characters proved to be a little too mainstream for some, so different variations on shirt designs quickly followed. Counterculture had a large influence on the kinds of designs being printed on shirts in the 60’s. Liberal attitudes towards sex, politics, drugs, etc. defined the trends for graphic tees.

Additionally, music was a huge part of the culture of the 1960’s and 70’s. Many bands quickly realized that branded merchandise could both promote their music and offer a second source of income, and as a result, the band t-shirt was born. Many bands from the 60’s and 70’s are recognized as much for their unique logos as they are for their music. Images such as the Rolling Stones’ lips, the Beatles vintage lettering, and Pink Floyd’s prism are iconic graphics, even today. Fans were only too eager to sport shirts featuring their favorite band- and still are.

Companies saw the success of branded t-shirts and realized they could do the same with their own company logos. The logo tee was used in the same vein as the band tee- a salable product to promote the brand, and a way to make the logo instantly recognizable. It’s easy to tell which brands took advantage of this trend- everyone knows the logos for Nike, Adidas, Calvin Klein, and other similar brands.

While the trend of branded tees fell out of fashion for a time, it has been making a comeback over the past few seasons as upscale brands like Chanel, Gucci, and Celine put out their own versions.

Graphic tees fell largely out of fashion during the early 2000’s. Mass production led to over-saturation- there were plenty of shirts, but most were not very interesting or well designed. However, the past few seasons, designers have turned their attention to this wardrobe staple and have began putting their own spins on it. The graphic tee has officially made a comeback.