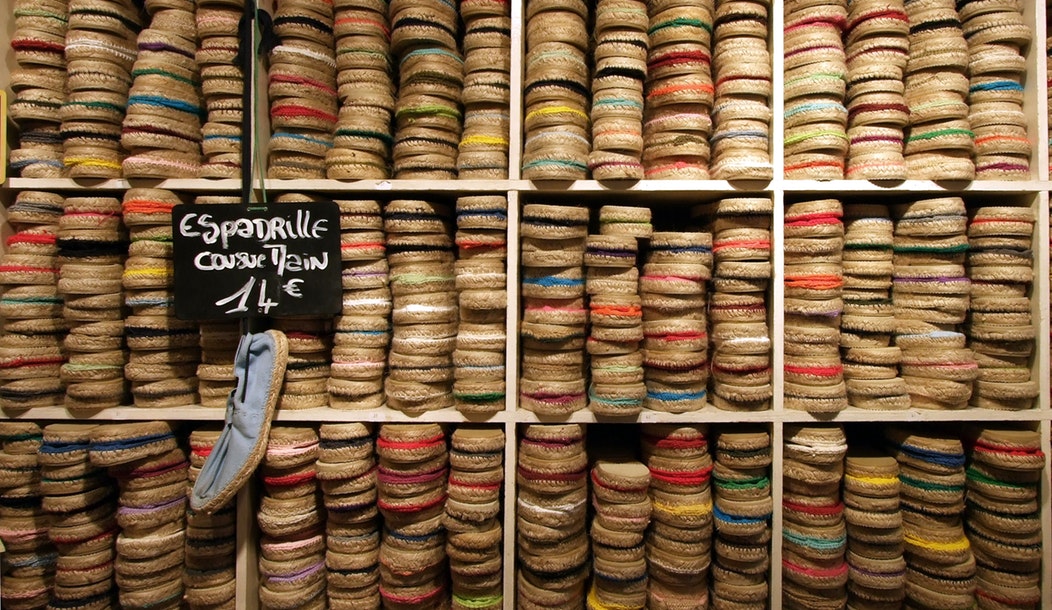 Espadrilles are the quintessential summer shoe- now more than ever. This season, so many designers have created their own takes on this classic. The simple espadrille has gotten a variety of unlikely updates, such as Miu Miu’s glittery slides that scream both “disco” and “beach party.” Espadrilles are easy, yet can be dressed up or down- it’s no wonder they’ve had a renaissance this season.

Despite the modern and trendy appearance of espadrilles, this shoe style has been around since the 13th century. Its origins can be traced to the Occitania and Catalonia areas of the Pyrenees on the Spanish and French border. The name is derived from the word esparto; “espadrille” is a reference to the plant that makes up the iconic sole of the shoe. This particular style of footwear was created to be simple and functional.

The original 13th-century production process was highly complex, requiring many craftsmen to create the treads, another artisan known as an alpargatero to create the rope soles, and finally a seamstress to sew the fabric upper and band. The hard work paid off, the resulting shoe was lightweight and flexible- perfect for the warm climate of the Pyrenees and active lifestyles of its people.

Espadrilles have strong roots in Basque culture. They were worn by everyone, from the King of Aragon’s infantry, to mine workers and priests. In addition to being worn by soldiers and laborers, espadrilles were also the go-to shoes for the Catalan national dance, Sardana. Dancers wore a specific type of espadrilles called “Espardenya,” that featured ribbons that tied around the ankles.

For the first few centuries of their existence, espadrilles did not stray far from their place of origin. However, by the 19th century, that slowly but steadily began to change. They started to be sold in much larger quantities in the French city of Mauléon. In fact, the demand was so high that women from the nearby Aragonese valleys came to work in the factories that manufactured espadrilles.

It was there in Mauléon where the shoes began to catch on with the rest of Europe, and subsequently, with the rest of the world. Many Europeans recognized the benefits of a sturdy and functional, yet lightweight summer shoe, and it quickly spread across the continent. By the 1880’s, manufacturers began exporting them to the warm climates of South America as well.

After a few more decades, espadrilles began to catch on as a fashion trend rather than a purely functional item. For instance, Salvador Dali favored a pair of black espadrilles that laced at the ankles, and many photos of the artist depict him sporting his beloved shoes. However, while artists and other famous figures were known for wearing this particular type of footwear, it was the stars of 1940’s Hollywood that really brought espadrilles into mainstream fashion.

Espadrilles became the “it” shoes for leading ladies of the silver screen. A few iconic examples include Rita Hayworth who sported a white pair in her 1947 film The Lady From Shanghai, and Lauren Bacall who wore them for the 1948 feature Key Largo. As with many trends from this era, once the public saw espadrilles being worn by famous actors in the movies, everyone wanted a pair.

The espadrille trend continued through the 1950’s and into the 60’s, but after a time, the same old style became a bit tired. Recognizing an opportunity to reinvent the classic summer shoe, Yves Saint Laurent decided to create a fresh take on the espadrille. Saint Laurent met with Spanish manufacturer Castañer at a trade show in Paris and subsequently commissioned an espadrille with a unique new design feature- a wedged heel.

Once Saint Laurent created the first high-heeled espadrille, the style became an instant success. The shoe was a highlight of 1970’s footwear- the sturdy heel and bohemian vibe fit right in with the trends of the era. The popularity of espadrilles continued into the 80’s, particularly while Don Johnson’s character sported them on Miami Vice.

Despite being a rather niche style of footwear, espadrilles have continued to remain in fashion. Celebrities such as Jennifer Lopez rocked the wedged high-heel version all throughout the nineties, and they have remained popular into the early 2000’s as well. For example, popular brand TOMS shoes is known for it’s feature style- a canvas shoe that is a variation of the classic espadrille.

Today, just about anything goes when it comes to espadrilles. Whether they are glammed up or understated, there is a style for just about everyone.