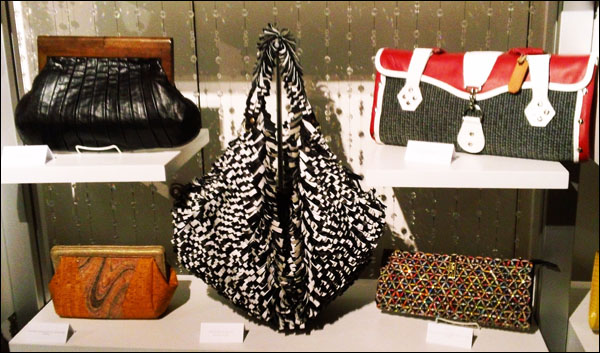 On June 15th I attended The Fifth Annual Independent Handbag Designer Awards at the Time & Life building in New York City. It was a great event; hustle, bustle, fashion, and style. As designers and guests poured in everyone was mingling and snapping photos by the display of beautiful handbags and enjoying tasty cocktails and sweet cupcakes.The scene was chaotic but before long everyone shuffled to the auditorium and took their seats to enjoy the show.

The opening speech was by Ariel Foxman, Managing Editor of InStyle, followed by a video about InStyle featuring Calvin Klein’s Francisco Costa and Eva Mendes. The creator of The Independent Handbag Designer Awards and Handbag Designer 101, Emily Blumenthal, spoke about her involvement with the event for the past five years and gushed about the the global nominees. “If you took an international flight to be here please stand up,” said Blumenthal during her opening speech.

Following  Blumenthal’s welcome speech, anticipation rose as each category was presented and winners were announced. And the winners were….

Prize: The winning bag will be featured at InStyle’s Summer Soiree event in Los Angeles and gifted to a celebrity guest.

Best Student Made Handbag, Inspired By The Colors of Vitaminwater

Prize: The winner will collaborate with Vitaminwater to create a limited edition product as well as a feature on the brand’s Facebook page.

Prize: The winner will receive the chance to collaborate with Timberland to develop a product for sale in its stores.

Prize: The winner will receive a feature with Professional Sebastian hair care’s fashionable and ethical brand.

Best Use of Swarovski Elements

Prize: The winner will receive a design sponsorship, including free access to crystals and Swarovski know-how. The winning bag will be produced as a limited edition and receive industry and consumer exposure in the US and abroad.

Prize: The winner will create a limited edition collection for Isabella Fiore.

Prize: The winner will receive a booth at WWDMAGIC, the opportunity to develop a capsule collection for Saks Fifth Avenue and a collaboration with Carlos Falchi.

Bob Goodwyn, the Senior Vice President of Sales of Dooney & Bourke, received the award on behalf of the winner.

Audience Fan Favorite (chosen from 30 finalists by voters on Instyle.com)

Upon completion of the ceremony the winners, nominees, presenters, and guests were invited to chat, take photos, and conduct interviews. From what I could see, the designer that received the most attention was the two-time winner Neide Ambrosio Martins De Souza of Pretinha Artes Lacres. Designer Carlos Falchi, who presented the Best Handbag in Overall Style & Design and was a recipient of IHDA Lifetime Achievement Award in 2007, spoke to guests and took photos with the winners.

Overall, it was a night dedicated to talented handbag designers from all over the world, offering these creatives their moment to shine. I think  designer Neide Ambrosio Martins De Souza statement sums it up well: “I feel like I’m winning an Oscar.”