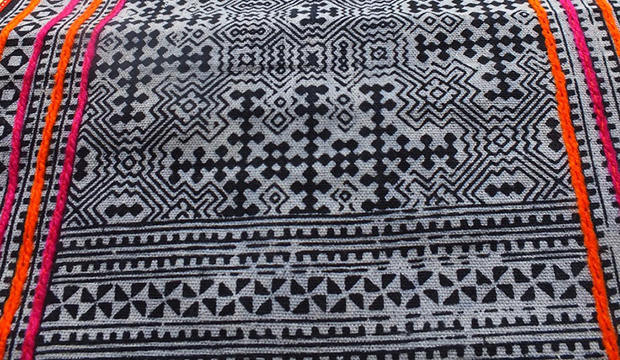 If you’ve ever owned a pair of jeans, it’s pretty safe to say you’re familiar with indigo, the dye that colors the garment its iconic shade of blue. Today the hue is a wardrobe staple, considered a basic along with black and white. But before indigo dye became synonymous with Levi’s, it had a long, complicated history as an exotic commodity reserved only for royalty- in fact, indigo fabric was once considered to be as valuable as gold, and even human life.

Nowadays, the idea of color as a luxury isn’t really something we recognize too much as a society. But it used to be that a simple hue had real value.

So how does a color become so desirable? There are plenty of contributing factors, but it breaks down to a few key elements: quality, rarity, and of course, beauty.

Indigo dye is indelible; while most dye permanence requires lengthy amounts of time to steep in a bath, indigo can penetrate and color any natural fiber permanently in an instant. Fabric is dipped into an indigo vat for only a few seconds, taken out, and exposed to oxygen. The chemical reaction between the air and dye create the brilliant blue hue that indigo is known for. The fabric’s first dip will yield a light shade, but if it is dipped into the vat again, the color will deepen, allowing for rich, brilliant hues.

You might recall that shades of blue and purple were colors reserved for royals or the extremely rich- this is because there were very few dyestuffs that could yield such hues, especially with such vibrancy. Knowing this, it’s no wonder that indigo was prized for it’s gorgeous and elusive color. European women used it as a hair dye and eye makeup, and women from West Africa used it for body paint and tattooing. Indigo cloth was priced at such high a value that it was referred to as “blue gold,” and in darker times, the fabric was even used as currency in the slave trade.

Cultivation of the dyestuff is believed to have occurred as far back as 5,000 years, in present-day Pakistan and Northwest India. By the 1500’s, indigo’s unique process was brought to Europe along with other valued items such as silks and spices. The continent was bewitched by the strange, almost magical dye process and it’s perceived “exotic” origins. While it’s full name, Indigofera, originates from a Greek word meaning “from India,” the dye’s deep history can be traced all over the world.

For example, many countries throughout Africa have well-established traditions concerning indigo dyeing. In Nigeria, the Yoruba people have created their signature resist-dyed adire cloth. The term translates to “tie and dye.” In later years, textile making in Nigeria grew and changed, and another method of resist-dyeing, adire eleko, was developed. Instead of stitch or tie resist, a starch paste was painted onto the stretched fabric to create images. In terms of woven indigo fabric, Ghana and Togo were hubs for kente cloth, a beautiful hand-woven textile characterized by brilliantly colored stripes.

In Japan, indigo dyeing is referred to as ai-zome. The dye was hugely popular during the Edo period, after a law preventing the lower classes from wearing silk was passed; indigo’s colorfastness on cotton made it an ideal dye to work with. There are various names for the shades of “Japan Blue,” that indigo yields, from shira ai (white indigo, a dusty light blue), to nasu kon (eggplant purple). Indigo has been used in tandem with various traditional resist-dye techniques, including shibori tying and stitching. Ikat, the process of resist-dyeing yarns prior to weaving them, is also often done using indigo.

In India, indigo was important for the same reason as in Japan- prior to the industrial era, it was the only dye other than madder that stayed permanently on cotton. While the dye reacted too quickly to be used for traditional Indian block-printing, it was often dyed with a resist made from gum, mud or wax.

By the 19th century, the indigo dye process began to undergo a change. As the demand for mass-production began to take hold of the fashion world, the indigo industry was unable to keep up. Production had become driven by the exploitation of dye workers, particularly in India, leading to the peaceful protest of the Indigo Revolt of 1859, which effectively ended cultivation.

Rather than bringing the industry to a halt, an alternative solution was born: synthetic indigo. This dye was created by German chemist Adolf Von Baeyer, who was awarded the Nobel prize for his work with indigo and other natural dyes. The synthetic version is the dye that we are familiar with today, particularly if you own jeans from large manufacturers such as the Gap. The advent of this invention caused a steep decline for natural indigo, while the much cheaper synthetic dye became the norm for the fashion and textile industries.

Synthetic indigo dominates the fashion world today, but there has been a very recent resurgence in appreciation for the natural version in contemporary fashion, particularly with ikat and other traditional handmade textile techniques being so on-trend.

While you probably can’t pick up a pair of naturally dyed indigo jeans at the mall, the dye has been spotted in the collections of more high-end designers. Smaller, more expensive labels allow for individuality and quality to be valued over mass production, which means indigo dyeing can be more feasibly incorporated.

And with eco-friendly design being so popular among earth-conscious fashion makers and consumers, the idea of such a beautiful and special natural dye is certainly appealing.