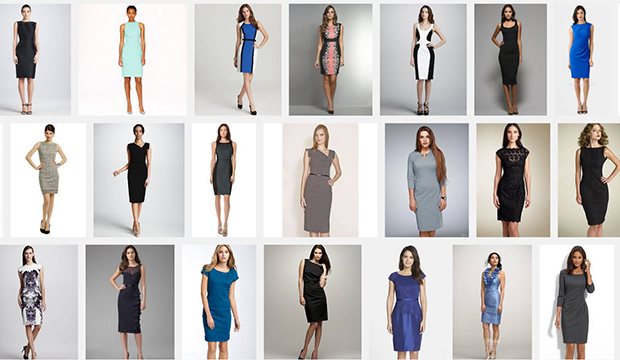 I am willing to bet that every single one of our female StartUp FASHION readers has at least one sheath dress in her closet. This particular dress’ sleek, minimal silhouette works with all body types, and continues to remain a chic and relevant style as the years go by. In fact, this particular dress has stood the test of time for longer than you might think.

While the sheath conjures up visions of the 1950’s and 60’s, this style has been around for much longer- thousands of years longer.

The sheath dress, a close-fitting dress with a defined waist, has taken on several different iterations throughout history. The earliest example is ancient Egypt, where sheaths were worn frequently– in the artwork of the time anyway. Women were often depicted in tight-fitting tubes of fabric with straps attached. How accurate these images were in relation to what women were actually wearing is debatable, however. These dresses would have been extremely difficult to move around in. A woman certainly would not have been able to walk, kneel, or perform most other actions shown in these artworks while wearing such restrictive clothing.

But whether or not the sheath dress was real or existed only in paintings, the sleek silhouette seemed to contain symbolic meaning for ancient Egyptians.

Sheaths made their second appearance in history in the late 19th century. Dubbed the “princess sheath,” this particular silhouette as you might guess, featured princess lines and a tight fit. The fitted waist showed off a corseted figure, and this shape was accentuated by a heavily ruffled lower back (the ruffles had replaced cumbersome bustles). As the Edwardian Era approached however, this style fell out of favor, replaced by looser cuts.

The 1930’s and 40’s saw another resurgence of the sheath dress, this time looking much more similar to the style we know today. Bias cuts were introduced, making fitted styles more attainable. Women of the 30’s (or rather, the ones who led the kind of lifestyle that called for gowns) began to favor the dramatic, long sheaths as an alternative to Grecian styles.

In the 1940’s, sheath styles became even more popular. Fabric rationing during wartime called for simpler, more fitted garments. The sheath fit this requirement, while allowing the wearer to retain a sense of glamour despite her lack of excessive adornment. Women who worked needed dresses that could take them from day to evening. By this time, Coco Chanel’s “little black dress” had become wildly popular as well, and the concept of versatile simplicity that came with it paired well with the sheath cut.

The 1950’s and 60’s were prime years for the sheath, and the versions worn during these two decades are what we tend to envision when we think of this dress. Quintessential 1950’s style came in two flavors. The first was Dior’s classic “New Look,” featuring a tailored bodice, nipped in waist and full skirt. The second look was a similar, but much sleeker sheath dress version. Dior created the “Vertical Line,” a more feminine and less boxy sheath than it’s 1940’s predecessors. The bodice and waist remained fitted, but the skirt also hugged the body from the waist down. The 50’s sheath often had a scoop or boat neckline, often decorated with little collars or bows. The skirt of the dress was what we refer to today as a “pencil” silhouette. This skirt was fitted, and frequently tapered down to the mid-calf. Some sheaths were so fitted at the bottom that a vent or kick-pleat was added to the back of the skirt so the wearer could walk. These exaggerated versions were referred to as “wiggle” dresses. The fitted sheath was much sexier and more sophisticated when compared with the sweetness of the “New Look,” and was favored by stars such as Marilyn Monroe and Bettie Page.

Sheath dresses continued to be popular well into the 1960’s. The look became even more streamlined, and a version called the “column sheath” came into fashion. These dresses were fitted throughout and ended at the knee, often featuring three-quarter sleeves, and occasionally bloused bodices. The column was a bit softer and more feminine, but required a slim figure and good corselette to pull off. First Lady and fashion icon Jackie Kennedy frequently wore sheaths, which were the perfect balance of glamour and sophistication.

The sheath dress has become and continues to be a closet staple. Today, most designers and brands have included some form of the sheath in their collections. They come in almost every fabric and color, and can easily transition from the office to after-work cocktails. The sheath’s elegance and simplicity make it perfect for any woman’s wardrobe.