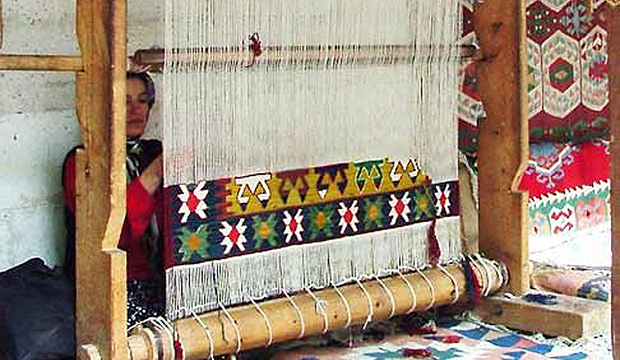 Have you ever seen a piece of fabric being woven? Or perhaps you’ve done some weaving yourself? Either way, if you have, you’ve also seen a weaving loom- the tool that transforms yarn into cloth. Weaving is a precise craft, involving each individual thread being aligned into perfect placement. As you might imagine, this can be difficult and time-consuming. Fortunately, this complex process is made far easier by the weaving loom and the advancements made with this important tool over the course of fashion’s history.

As civilization began to move away from the use of animal hides as their primary material for garments, it was discovered that lacing or knotting lengths of fiber together could create fabric. This way of cloth-making began some time before 5000 BC, with finger weaving, tying and twisting debuting as some of the first textile techniques.

During the Neolithic period, weaving began to develop into the process it resembles today with one of the first iterations of the loom. The warp-weighted loom is a simplistic weaving tool in which the warp threads are positioned vertically. As the name suggests, the threads are pulled taught and kept under tension by weights that have been fastened to the end of the warp. The fabric is woven from top to bottom, beating the weft threads upwards. Evidence of early versions of this loom were found in Serbia as well as Switzerland. After a stint of popularity in Ancient Greece, it’s use spread through Europe, particularly Scandanavia, before falling out of favor.

Another early version of the weaving loom is one that is still widely used in various cultures around the world even today: the backstrap loom. This particular style of loom is found mostly in South and Central America, particularly Guatemala and Peru. However, versions of it also exist in parts of Asia such as Japan, Indonesia, and India; as well as Navajo and Zuni Native Americans. It is difficult to pinpoint exactly when this particular tool came about, as many of the climates in which it was used were not conducive to preserving the loom components or the resulting fabrics. The earliest evidence of a backstrap loom can be traced to Eastern Asia during the Bronze-Iron Age. As the name suggests, the backstrap loom works by stretching the warp threads between a stationary object and a strap that is wrapped around the waist of the weaver, who leans back to create tension. This tool is deceptively complex, and unique in that the weaver becomes part of the loom, and can act as an “automatic warp regulator,” constantly adjusting tension.

The design of the loom began to advance more rapidly during the Middle Ages, with the invention of treadles. This particular part of the loom lifts specific heddles (looped strands that lift individual threads in the warp to create a pattern.) This invention, believed to have originated in China, allowed for much more complicated textile patterns to be created with ease and this same basic system is still used in weaving today, albeit with some more advanced adjustments. The 18thcentury-born draw loom is an early example of this aspect of weaving technology.

Another crucial development in weaving to come out of this time period was the invention of the flying shuttle. The shuttle is a tool that holds the weft threads, and is slid through the warp, weaving them into the fabric. In earlier iterations of the shuttle, the shuttle was slid through the warp by hand, which meant that in order to weave larger pieces, weavers had to pass the shuttle down to one another, which was an inefficient solution. In 1733, the flying shuttle was invented by British weaver John Kay. A mechanized system, this technology allowed the shuttle to fly all the way across the warp uninterrupted, which sped up the weaving process significantly. This tool would be hugely popular in weaving for the following two centuries, only petering out with the invention of mechanized looms.

By 1786, steam engines replaced the human hand as the loom’s power source. During the Industrial Revolution, weaving technology sprang forward, and automated looms became the norm in cloth production. One such invention that is still used today is the Jacquard loom, which came about in 1801. This particular loom utilizes cards with punched holes to dictate the patterns. These cards are strung together in order, and when put together, create the overall design. This particular loom made it much easier to produce complex patterns such as brocade and damask.

By the beginning of the 20th century, electricity allowed automated weaving to progress even further. Electric motors appeared in place of steam engines, and by the 1940’s looms were fully mechanical. A tool called a projectile briefly replaced the flying shuttle, but this too would be improved upon. Swiss loom manufacturer Sulzer created fluid jet looms- which are exactly what they sound like. A pressurized jet of water or air pushes the weft threads through the warp. This innovation is the current technology used in weaving today.