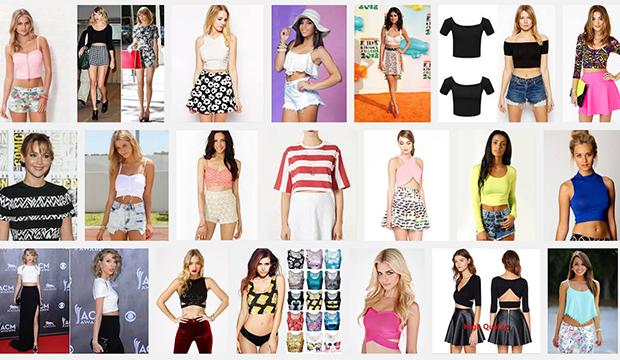 If I had to pick one standout trend of last summer, the crop top would win hands-down. With all the throwbacks to the 90’s trending right now, it was inevitable that the crop would make a comeback. Of course, today’s modern version of this look has a style all it’s own, and the crop top has been around for much longer than the 90’s.

It took a long time for the crop top to materialize in the West, partly due to a colder climate and partly because of Western fashion history’s notoriously puritanical dress code. Until relatively recently, European and American women’s fashions were often meant to cover and restrict as much of the body as possible.

However, in parts of the East was a different story. Since the weather was generally warmer, it did not make sense to cover up so much. For example, in India, the traditional sari is typically worn with a short top underneath called a choli. This style dates back hundreds of years, and is still paired with saris today.

Additionally, the midriff-baring garments worn for belly dance also come from the East. It is difficult to ascertain the exact origins of the outfit, as it went trough various changes over a period of time, and different places such as Egypt, the Middle East and Asia had their own styles.

Eventually, a style known as the bedlah would gain prominence, at least to Westerners. Designed by Egyptian cabaret owner Badia Masabni (who was hoping to entice tourists), the bedlah was a two-piece costume that, of course, showed off the midriff for the purpose of dancing. In 1893, belly dancers gave a performance at the World’s Fair in Chicago, introducing the West to the bedlah, and the concept of the crop top in general.

While the crop top was intriguing, it would take several decades before it caught on with Westerners. For a time, it was considered too “exotic” and revealing to be incorporated into their fashions, and unlike parts of the East, there was not much of a need for it.

By the 1940’s however, this would change- at least the part about necessity. During World War II, many items were rationed, including fabric. This meant that clothing designs had to be much more creative in order to conserve raw materials. Apparel designers seized the opportunity as an excuse to show off a little skin- chopping off the bottom half of a shirt was an easy yet stylish solution.

The crop top became a characteristic look of the 1940’s. This version was often cut with a high collar, short sleeves, and worn with high-waisted midi skirts. This ensemble created the hourglass figure that was popular at the time. It was especially suited to vacationing in the summer, as it looked chic, yet effortless.

However, like most new trends, not everybody gave the crop top such a warm welcome to the fashion scene. Many still felt the garment was much too revealing. In 1945 a woman was fined for pairing her shorts with a midriff-baring halter-top in Central Park.

Fortunately, the majority of society was progressive enough not to outlaw the shirt entirely. This dressy, more conservative (by today’s standards) style of crop top stuck around throughout the 1950’s. The 60’s included the crop, but it was more of a fringe trend, often cut in the peasant blouse style popular in hippie culture, or as a collared shirt tied in the front.

By the late 1970’s crop tops made a comeback in a very different way. The garment’s hemline began to rise, while the bottoms it was paired with were cut lower. The crop top became a glamorous sex symbol, worn by pop culture icons such as Cher. It’s popularity continued to grow, and by the 1980’s, the top became the trend we know, love, and are currently trying to emulate.

The next two decades would be the golden age for the crop top. A toned body and sportswear were trendy in the 1980’s, and the crop was perfect for showcasing that. The “aerobic” look- a cropped sweater paired with a leotard or tank is classic 80’s. The style was a favorite of Madonna, who made it a part of her signature look. The crop top frequently graced the silver screen during that period- it was styled on many iconic film characters, including Baby from Dirty Dancing and Alex in Flashdance.

The crop top continued to feature heavily in pop culture all throughout the 90’s. Low-rise jeans paired with “belly shirts” were all the rage, especially in music and television. Pop stars such as Britney Spears, Christina Aguilera, and the Spice Girls frequently incorporated the tops into their wardrobes.

Cropped shirts fell off the radar during the early 2000’s, but the past few seasons they have made quite a comeback. While the current styles are certainly recalling the 90’s, today’s look is more understated. Pairing a crop top with a high waist is also on trend, harkening back to the 40’s and 50’s and creating a nice blend of points in fashion history.