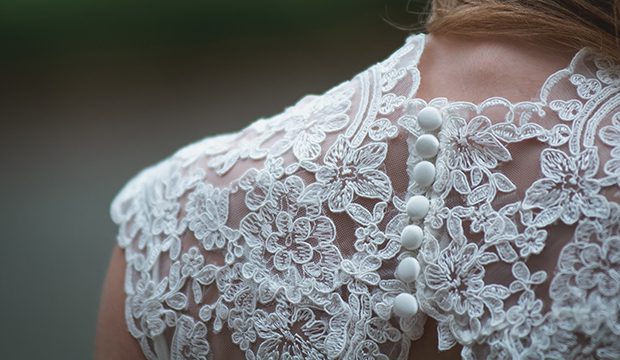 If you’re looking for a classic fabric with a touch of glamour, look no further than lace. This complex and delicate textile is one of the most beautiful in the world. Nowadays with modern technology, there are so many different styles and types of lace- there is a lace for any kind of garment and occasion. It can be either innocent or seductive; prim and proper or rebellious.

It is difficult to pinpoint exactly when and where the fabric came to be. Spain, Italy, France, Belgium and Germany have all attempted to claim that the first example of lace originated there, but none of these claims has been proven.

While we typically associate lace with complex woven or needleworked fabrics, the oldest known style is actually cutwork (or whitework). This type of fabric was referred to as “nun’s work,” as the art was historically practiced in convents located in central and southern Europe.

The most well-known forms of lace (needle and bobbin) have their roots prior to the 16th century. Needle lace refers to the use of small, intersecting stitches to create the textile, where as bobbin lace is made by using bobbins to twist the yarn around itself on a frame made of pins. Before these crafts, the term “lace” was referring to the cords that “laced” a garment together, such as in a bodice. It also referred to the braided tape that embellished military uniforms, and woven bands that adorned the edges of servant’s livery. By the time the 16th century came around, these lace trims became larger and more complex. “Insertions,” or lace bands that seamed clothing together became fashionable, and was often used to join shoulders and seams. Bobbin and embroidery techniques were used to create these bands.

Later into the 16th century and well into the two subsequent centuries, bobbin, needle, and cutwork laces were developed into more sophisticated crafts. Handcrafted lace was the height of fashion, and everything was made from it: collars, cuffs, ruffs, headpieces, etc.

At the epicenter of it all was Italy. Venice and Flanders had both had booming lace industries at the time: Flemish cutwork and bobbin laces, and Venetian needle laces. Even so, much of Europe had successful lace industries, such as Chantilly in France.

Designs spread easily via the publication of pattern books. These books contained no instructions- a skilled lacemaker could simply study a design and figure out how it was made. Handmade lace was a precious commodity and available only to the wealthiest of customers. This is likely why we associate it with elegance and excess.

Over the several centuries during which handmade lace was at it’s height, different styles and trends came and went, as they tend to do in fashion. In 17th century France for example, the court of Louis XIV couldn’t get enough of it. At the time, France was the center of fashion, and wealthy folks loved mixing heavy, intricate Venetian laces with the ornate fabrics and lavish garments they wore. Huge sums of money were spent on foreign-made lace, to such a detrimental degree that Louis and his finance minister came to the conclusion that they must create a local lace industry to keep money flowing within the French economy.

Later in the 17th century, tastes changed and lighter, less substantial laces began to trend. Clothing made entirely of lace was extraordinarily expensive, meaning the market for it was very small. Laces lacking the heft of Venetian lace were well-suited for trimming cuffs, hems, and shirtfronts, making them more accessible price-wise. From this time on, cost would continue to shape the design and production process of lace.

By the end of the 18th century, lace, while still a luxury fabric, had become even more simplified in order to cut costs. Net grounds with small, simple florals came into fashion.

The 19th century would have a huge impact on the lace industry, however. It was during this time that machines were invented to manufacture lace mechanically. Early versions were comprised of machine-made net that was hand embroidered to give it the look of lace. However, these net machines were eventually combined with jacquard, allowing for patterns to be mechanized as well. Early lace machines such as the Pusher and Leavers would be improved upon over time, and eventually, mechanized lace making began to overtake the handmade industry. The aristocracy, trying to preserve the status symbol that came with wearing lace, began placing emphasis on donning antique (i.e. handmade and expensive) lace, but the less wealthy got creative and began dyeing their machine-made laces with tea in order to get the look.

Today, almost all lace is machine-made, and can be easily and cheaply incorporated into any garment. While it does mean that the handmade industry is far from what is used to be in it’s heyday, lace is certainly much more accessible now than it used to be. And it is this accessibility that has allowed for all the wide variety of styles and looks that can be created by lace today.