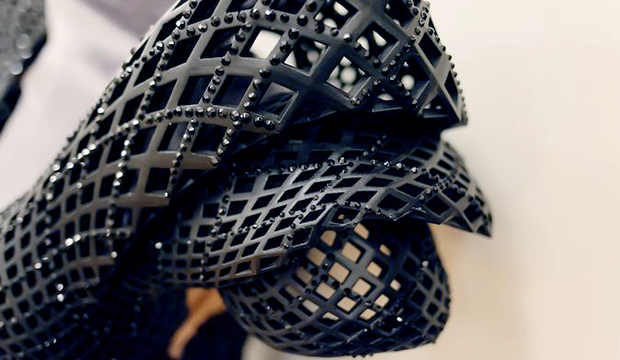 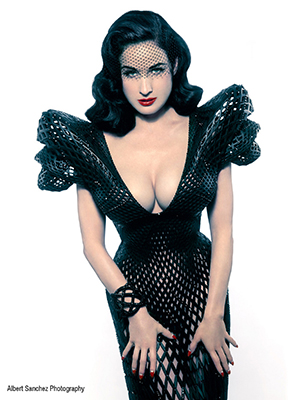 The latest buzzword spanning all disciplines of design and technology is a true scientific feat: 3D printing.

This new breed of innovation offers limitless potential, already seeing use in a number of ways, from prosthetic limbs to sex toys. In the wake of this exciting and versatile new method of product design, it is no surprise that the fashion industry has already begun to dip its toes in the water.

What is 3D Printed Fabric exactly?

The basic gist of the 3D printing process is that it is additive (as opposed to machining, which involves the removal of material). Thermoplastic material is built up in layers using ultraviolet beams to create an exact replica of its digital model.

Despite being so entrenched in technology, the method is surprisingly eco-friendly; due to the nature of the process nothing is wasted. More traditional methods of creating garments yield leftovers, such as loom waste during the weaving process, as well as fabric scraps when cutting patterns.

A 3D printed garment requires no weaving, knitting, cutting or sewing. For more process-oriented designers this is not necessarily a benefit, but though it may not be for everyone, like any piece of design technology, it’s potential should be considered thoughtfully rather than ignored.

A few fashion designers have already jumped at the chance to experiment with this kind of innovation.

Designer Francis Bitonti has built a studio practice around technologies such as 3D printing and laser cutting.

For example, “Dita’s Gown”, produced by the studio,  juxtaposes a vintage silhouette with a futuristic printed textile to create a contemporary final product. Collaborating with Michael Schmidt Studios and 3D printing company Shapeways, a sculptural garment was created featuring “articulated” fabric resembling thick black netting. To add some glamour to it’s edgy style, the gown was topped off with the adornment of over 12,000 Swarovski crystals.

Would 3D printing fit in with your design process? What do you think of the technology?