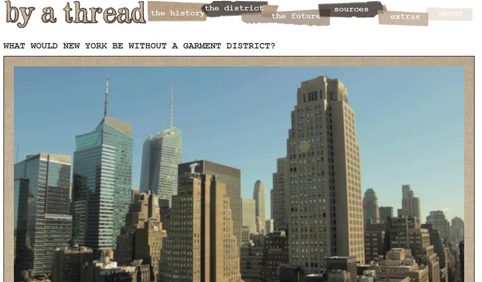 What would New York be without a Garment District?

Amid finals week and a quickly approaching graduation date, the two women behind this project took a minute to answer a few questions about their work:

StUF: Please tell us a bit about each of you and how you came about this project.

BAT: Tahiat studied fashion design at FIT and practically lived in the Garment District for five years. During her studies and while working in the area, she developed an interest in the businesses and people still working in the District and what New York was losing in the face of overseas garment manufacturing competition. When she came to the J-school, she was also interested to discover that there were people who did not realize New York even had a Garment District.

Dewi had some experience covering social and workplace issues for her home paper in Melbourne, Australia, including the increasing loss of manufacturing jobs. She’d written about the cultural history of garment making and was interested in what happens to industries and workers when decades of knowledge start to disappear.

Both of us are in New York to study digital media at Columbia University’s Graduate School of Journalism.

StUF: What is the goal of By a Thread Project?

BAT: We wanted to provide a comprehensive look at the Garment District that didn’t only rely on telling the stories of its past. The specter of rezoning had been hanging over the District for a few years and we wanted to explore what the Garment District still meant for those who relied on it for their livelihoods, as well as offer a balanced view on what the future might (and should) hold, taking in the opinions of building owners and business people as well as those tied to the district through generations.

We also wanted to show that it was still very much a ‘living district’ and through the stories of Fatima Monkush and Nyla Hashmi, the designers of Queens-based womenswear label Eva Khurshid, we wanted to show how many specialized operators are involved in putting a single collection together.

StUF: What has been the most surprising thing you’ve learned along the way?

BAT: It surprised us that there were not clear-cut divisions on the issue of what should happen to the district. Certainly, we encountered many people with strong views. But that did not mean they were averse to negotiating. Irrespective of whether they had been successful or not, people from fashion, real estate, manufacturing and the City, had tried several times to sit down and work out a solution that would satisfy all sides. It’s a shame that, as yet, they haven’t been able to agree on one.

It wasn’t a surprise, per se, but it also frustrated us that we weren’t able to talk with NYCEDC [New York City Economic Development Corporation] despite how deeply involved the agency’s been in these conversations.

StUF: What do you think is the future of the garment district?

BAT: The million dollar question. The consensus of everyone we spoke to was that it is unlikely to return to its glory days, when it provided for up to 20 percent of jobs in the city and much of the clothing sold in the United States. But there is a very real community that still exists there and emerging designers across the city rely on it to get a toehold into the industry – and that’s something most people agreed was worth investing in.

StUF: What are the next steps for By a Thread Project?

BAT: Mostly we would just like people to take the time to watch/read/absorb what we put together over five months and we’d love for it to be published on a bigger platform so that more people can see it. 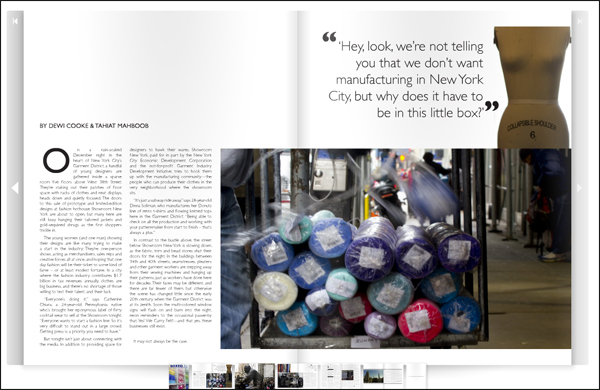 We {StartUp FASHION} do hope that you, readers, will take the time to read what these two young women have put together.  Remember- you are the next generation of fashion designers and influencers.