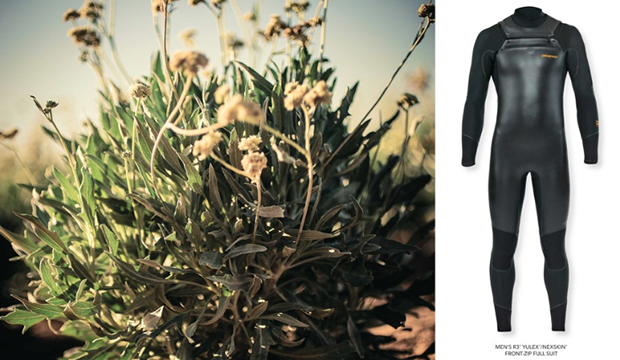 In the past couple of season, neoprene textiles have been having a bit of a moment, both in fashionable and functional garments. But while the fashion world has become enamored with this “scuba” fabric, Patagonia is decidedly unimpressed.

Once the company embarked on the task of manufacturing wetsuits, they “quickly identified neoprene as a material that needed improvements to lessen its environmental impact.”

However, after extensive searching and experimentation, the brand realized that rather than fixing what was broken, they needed to find a completely alternative material. Patagonia soon enlisted the help of Yulex Corporation (a company specializing in clean technology and bio-materials) to create what they needed. After four years of collaboration and development, they arrived at a solution: guayule.

Thanks to Yulex, guayule is the only plant other than hevea (the Brazilian rubber tree) used in the manufacturing of rubber. The desert plant is locally grown, as it is indigenous to the United States, and requires no pesticides and very little water.

This makes it an ideal crop for material production, and a far greener alternative to traditional rubber.

Together, Patagonia and Yulex developed guayule rubber, which initially resembled latex, into a wetsuit material. The resulting textile is perfectly functional and made up of 60% guayule.

Wetsuit material is softer and more elastic that traditional neoprene as well. And because the plant is so easily renewable, the material can be replaced faster than the time it takes to wear out- without the negative environmental impact.

While Patagonia admits the textile is not perfect (the eventual goal is a material that is 100% plant-based), guayule rubber is certainly much more environmentally friendly than the material it replaces. Still, Patagonia is committed to continue improving on the material- for example, the wetsuits in their 2014 line will have an added Nexkin windproof coating.