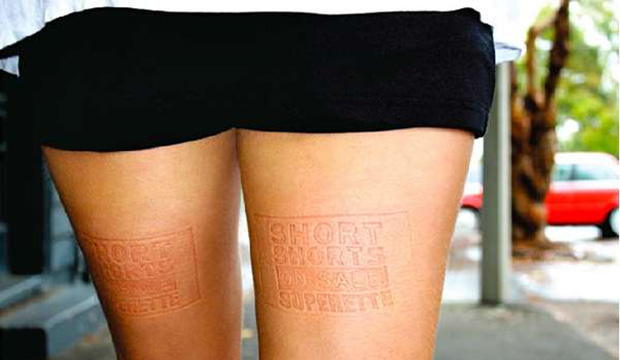 Great marketing is one of the most important aspects of establishing a successful and profitable brand. As independent designers, you don’t always have the budget to put together an elaborate campaign. Fortunately, sometimes all you need is some good old creativity.

Let’s take a look at New Zealand based fashion e-commerce brand, Superette and how they decided to get creative with their marketing.

In 2011, Superette was in tune with the fact that super short shorts for both men and women were hot sellers on their platform.  Based on  this knowledge, they asked themselves “What would be the best way to take advantage of all this exposed skin?”

The answer:  Use it to market our brand.

Superette spent time in cities and fashion districts where they knew their target consumers spend time and placed indented plates on bus stops, park benches, and other places that people would most likely plop themselves.

Then, whenever people would sit down on those seats in their short shorts, the message of “Short Shorts On Sale Superette” would be imprinted on their thighs.

So not only were they branding a multitude of seats around town but they also had a little army of ambassadors walking around, sharing their brand and message with anyone who glanced their way. Free press, you might say.

That skin imprinted message was found to last around 1 hour. Kinda crazy but also kinda brilliant. This kind of ‘free press’ is what separates smart and unexpected brands from the more boring and unoriginal ones.

Whether you are a small independent company or a multi-million dollar corporation, it is always important to keep in mind how you are going to catch the consumer when they least expect it and generate curiosity.

What do think of Superette’s campaign?  Clever or Silly?