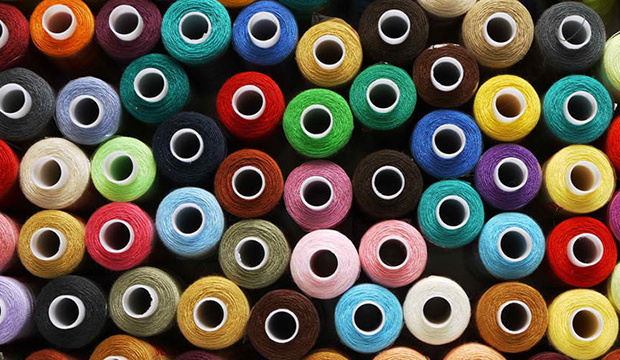 Ever since humanity figured out how to make clothing, we have been working with fibers. From cotton to silk, we learned how to work with various fibers conveniently provided by Mother Earth. Until, that is, we discovered how to make our own!

“Fibers,” the raw material from which yarn and cloth are made, are categorized by where they came from. For example, fibers such as cotton, and linen are plant-based fibers- they grew from the ground. Wool comes from sheep, and silk from silkworms, and so they are described as animal-based fibers. However, fabrics such as rayon and polyester are referred to as synthetics. This is because we are able to synthesize these fibers to create them ourselves from scratch.

Synthetic fibers have has a surprisingly lengthy and involved history– the first attempts at such a material goes as far back as the early 1800’s, the original goal being to devise ways to mimic natural fibers, and streamline the process of textile production. Silk, for example was such a precious and labor-intensive commodity; could there be an easier and cheaper way to achieve the hand and luxury of this prized fabric?

The first successful patent for “artificial silk” was granted to a Swiss-born chemist named Audemars. To create this new fiber, he dissolved the soft, fibrous inner bark cut from a mulberry tree. By chemically modifying this bark, Audemars was able to create a cellulose solution. He formed threads in a primitive manner- dipping needles into his solution and drawing them out.

Chemist and inventor Sir Joseph Swan was another early pioneer in man-made fiber. His method also involved modifying the fiber found in tree bark, and is one of the earliest examples of modern day rayon. Rather than use Audemar’s way of “spinning” yarn, Swan modeled his production method on the silkworm’s. By forcing the liquid through fine holes, he was able to create thread filaments. Swan saw potential in his discovery, and set out to contribute his ideas to the textile industry by unveiling his fabrics at the International Inventions Exhibition in London.

These initial ideas would continue to be expanded upon. In 1894, French engineer Hilaire de Chardonnet enacted the first commercial-scale production of artificial silk. He built the first commercial rayon plant in Bensacon, France. The country was experiencing a severe silk shortage at the time, due to the destruction of French silkworms, and bringing a synthetic product to the market provided a much-needed solution. Chardonnet also discovered nitrocellulose, the main ingredient in his product. However, while it was a huge sensation at the Paris Exhibition, this proved to be a less-than ideal silk substitute, as the material was extremely flammable. It was eventually replaced by more stable alternatives.

By 1894, Charles Frederick Cross’ research and developments lead to the discovery of what is known today as viscose. This particular material was named for the viscous solution of xanthate. By 1924, the first commercial viscose rayon resin had been developed, the first commercial liquid used in the production of rayon and cellophane. Rayon production soon began to grow to meet the increasing demand, as fabric manufacturers were able to buy this alternative fiber for half the price of silk.

1931 brought the advent of nylon, which was ceremoniously dubbed the “miracle fiber.” Wallace Carothers, an American chemist at Dupont, researched “giant” molecules known as polymers, focusing his work on the creation of a fiber. The resulting material was a success, and nylon’s invention was a turning point for synthetics. All previous fibers had a natural base (rayon is derived from wood pulp), however, nylon was entirely synthesized from petrochemicals. It was used in everything from sewing thread to stockings. During World War II, nylon was the center of a bit of scandal when its production resources were deemed only to be used for military purposes. Nylon tights that previously went for $1.25 a pair were now being sold on the black market for $10. Movie stars and pin-up girls such as Betty Grable would auction off nylon hosiery for up to $40,000 a pair to raise money for the war effort.

By the 1950’s research into other synthesized fibers was underway. Dupont added the wool-like acrylic (a plastic-based fiber) to its line of fabrics. At the same time, polyester, a fiber that has been a part of Carothers’ earlier research, was also gaining momentum. It caught the interest of the Calico Printer’s Association in Great Britain, and was further developed there by J.T. Dickinson and J.R. Whinfield. A successful material was produced by “condensation polymerization of ethylene glycol with terepthalic acid” (essentially, it’s plastic.)

Synthetics were wildly popular in the 1960’s and 70’s, decades in which polyester was notoriously ubiquitous in fashion. Usage as well as production soared, and improvements were made, most notably for safety standards. Flammability has always been something to account for when it comes to synthetic fabrics, and in the 70’s a Federal mandate for flammability standards was enacted.

Today, synthetic fabric is used in every area of the fashion industry. It is particularly ideal for swim and sportswear, as it is easier to wash, quick drying, stain resistant, and anti-microbial.